On the southeast of Ireland, in County Waterford, lies the coastal port city with the same name – Waterford. It is reportedly the oldest in the whole country. It has been founded by the Vikings in the year 853 and over time it grew up on both banks of the River Suir. Today the local port is the busiest one throughout Ireland, however its old city centre is well hidden beyond the waterfront. 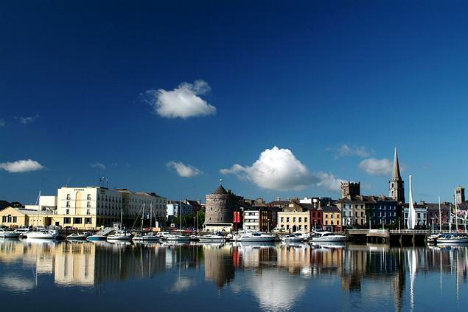 Photo licensed under the Creative Commons, created by Hotelsireland

Vikings deliberately chose this location for the founding of the city, they were looking for good berth and found it here. They called this city as Vadrafjord, which can be translated as “The weather port.” Waterford was once protected by defensive walls, which consisted of a total of 17 towers, but only six of them remained until now. The best preserved section leads from the Watchtower, where the Castle Street meets with Parnell Street. The best known and most interesting is Reginald’s Tower (originally Ranguald’s Tower). This cylindrical Norman tower was built by Ranguald Viking in the year 1003. You can find it at the end of the Mall street. For a long time served as a mint, prison and military store. It is the oldest public building throughout Ireland. In 1170 had to be rebuilt after the attack of enemies. Today it houses a small museum.

Besides Reginald’s Tower stands an equestrian statue of General Meagher, a local native, a fighter for the rights of Irish and later General of “Irish Brigade” in the American Civil War. If you want to know the Vikings history of the town then you should visit Waterford Museum of Treasures, which houses the Viking jewelry, daggers, leather shoes, eating bowls and other items. The museum is not only about the Vikings, but also about the turbulent history of this city.

Another interesting sight in Waterford is Roman Catholic Cathedral of the Holy Trinity lit by chandeliers from Waterford crystal. The cathedral is situated in Barronstrand Street and is the only neo – classical Georgian Cathedral in Ireland. Eastward of it, in the Bailey’s New Street, you can then see the Protestant cathedral. It boasts a richly decorated stucco ceiling and also one of very seductive sculpture. It is interesting that both cathedrals were designed by the same architect which cannot boast any other city in Europe.

In the city you should not miss the tour of Waterford Crystal Visitor Centre, where you can learn about the production process of the famous local crystal. This building is probably the most visited attraction and is regularly overcrowded. If you want to see a beautiful hand-carved crystal, you have to arrive early in the morning.