Home » Sights » Cities » St. Albans – one of the most beautiful towns around London | United Kingdom

St. Albans – one of the most beautiful towns around London | United Kingdom

On the southeast of England, in the valley of the River Thames, is a town of St. Albans. It belongs to the county of Hertfordshire and is situated just few kilometres away from London. This ancient and fascinating city boasts more than two thousand years of history and houses many valuable architectural monuments. 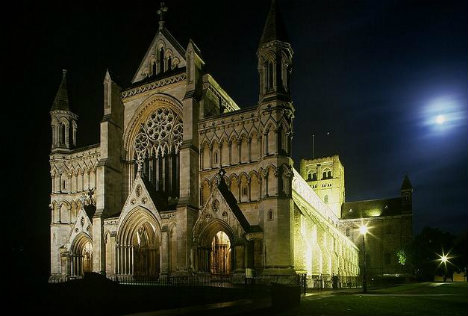 Photo licensed under the Creative Commons, created by Allan Engelhardt

The area of today’s town St. Albans was in ancient times inhabited by the Celts. Their village was located at Prae Hill, about two kilometres west of the city. The town was built around the Benedictine monastery, where was in year 324 executed the first British Christian martyr St. Alban.

For centuries, the town remained in the place of the most tumultuous events in the history of England. Originally a Roman settlement of Verulamium became the center of the province of Britannia, and later the leading spiritual centre of the region.

The local Abbey of St. Alban was founded in 793 and in 1553 transformed to the parish church. When St. Albans received the status of the city in 1877, it was appointed the Cathedral. This great example of medieval architecture still dominates the city. It features some Classical elements, such as murals on Norman pillars of the 13th and 14th century.

The oldest preserved part of the cathedral is the nave of the year 1077, which is the longest in England with its 84 meters. Arches built in the early English Gothic style come from the 13th century. In the cathedral you can find the remains of the shrine of St. Alban. It is a marble pedestal composed of more than 2000 small fragments. Next to it is a tomb of Duke Humphrey of Gloucester.

In St. Albans you can also visit the oldest surviving pub in England – Ye Olde Fighting Cocks, located on the street Abbey Mill Lane. It is also one of the most unusual constructions and originally served as a medieval dovecote.

According to the recent research of Nationwide Building Society, St Albans is now the 3rd most expensive city in UK (after the heart of London – Westminster followed by Winchester).

View St. Albans – one of the most beautiful towns around London United Kingdom in a larger map