Gran Canaria – the most diverse island of Canary Islands | Spain

The island of Gran Canaria is the most diverse island of the whole archipelago – Canary Islands. Often referred as a miniature continent, not only because of the diversity of landscape and environment, but also climate. Once you visit Gran Canaria you feel like you visited three continents instead of one island. There are the sand dunes like in Africa (called Dunas de Maspalomas), mountainous inland and freshwater reservoirs, as can be found in continental Europe, and deep canyons in you can evoke America. 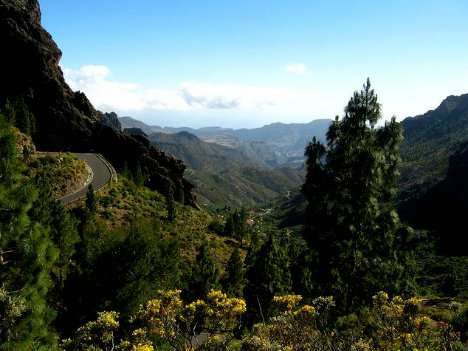 Canary Islands also feature rocky volcanic peaks. The one on the island of Gran Canaria is called Pico de las Nieves. Its slope descends to the ocean and is cut by numerous canyons. The island is divided into two climatic zones. North is more fertile and wetter, while south is more dry and warmer. Actually, we can say that the whole island is quite diverse.

Gran Canaria is the third largest island of the Canary Islands, it is also one of the most popular and therefore most vibrant tourist destinations in this area. The capital is Las Palmas. Varied landscape consists of sand dunes which you can enjoy from the camel back, palm and pine groves, and also of inland mountain forests. Thanks to the favorable climate the island is also suitable for banana trees. Very famous is spectacular botanical garden Palmitos Park – an artificial oasis in the canyon near Playa del Inglés. 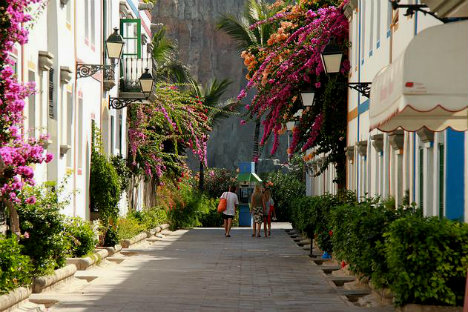 Photo licensed under the Creative Commons, created by Cristian Bortes

The next stop you should certainly do in a picturesque port of Puerto de Mogan. It is indeed a picturesque town where you can meet with genuine Canarian residents and taste some of the local specialities in one of many nice restaurants. It is an island full of souvenirs and Spanish specialties. People in Gran Canaria are very hospitable and respectful.

Do not miss also the botanical garden Jardin Canario in the town of Alta Tafira (southwest of Las Palmas). Admission is free and you can see all the original flora here.

There are two famous ports suitable for Yachtsmen – Puerto Rico and Puerto de Mogan. You can find here both a school for sailors, as well as for divers. Puerto de Mogan is also a paradise for fishermen, because there are strong ocean flows that bring a food for fish. Grand Canaria offers ideal conditions for golf fans, you can even organize your own golf tournament here.

The hot favorite for accommodation on this island are well-furnished caves. 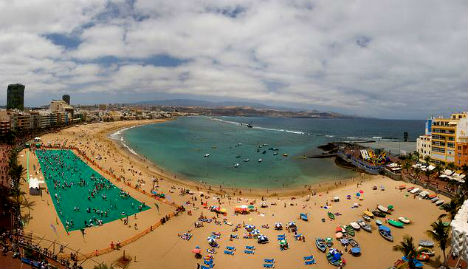 Photo licensed under the Creative Commons, created by Juan Sosa

Playa Amadores – Beach with white sand lined with various shops and restaurants, has a reputation as one of the most beautiful in the whole of Gran Canaria. Playa Amadores is located near the center of Puerto Rico. Interesting is, that the beach which is located among the rocks has been created artificially to meet the requirements of even the most demanding clientele.

Playa del Ingles – The longest beach on the island, located in the middle of Maspalomas. Playa del Ingles with its charms is the most visited beach of Gran Canaria. Jumbo Multifunction Center located directly on the coast provides a wide range of services. 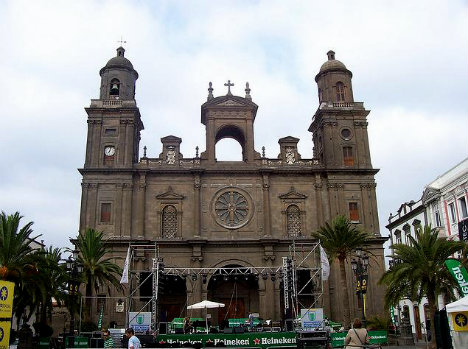 Photo licensed under the Creative Commons, created by Alberto Garcia

Other places worth visiting in Gran Canaria

Las Palmas When you visit Las Palmas you should definitely pay for a sightseeing tourist bus. It runs from the city station and take you to all the places that are worth seeing. Additionally, you can easily get off the bus any time, and later get in (with the same ticket) the next bus.

The historic city of Telde
About 13 km south of Las Palmas you can see the second largest city on the island – Telde. There is a picturesque Basilica of San Juan Bautista. There is also the widest coastal strip on Gran Canaria with many diverse beaches (such as Hombre, Melenara etc.).

Artenara
Artenara is a beautiful place with Canarian atmosphere and beautiful nature, situated in the mountains and the valley are. It offers stunning views of the surrounding forested hills and small mountain lakes.