Dartmoor National Park is a rough landscape of heaths, bogs and granite rocks, located in the county of Devon in southwest England. Granite plane covers an area of approximately 1200 km2 and rises to an altitude of 500-600 meters. In the middle of the landscape you can see the granite rocks called Dartmoor Tors, that look like statues from afar.

The largest of these rocks is called Yes Tor and rises to a height of 620 meters above sea level. The local peat bogs are among the largest in Europe. There are herds of ponies running free across the protected area, which serves also as a granite mine. You can also find here a number of prehistoric monuments. 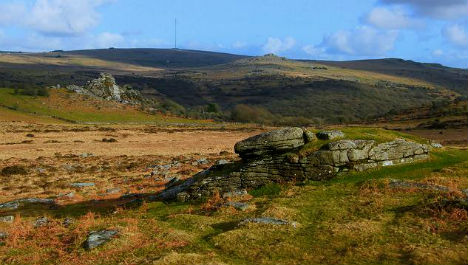 Photo licensed under the Creative Commons, created by Mark A Coleman

Like for the whole Britain, also for this area is typical a fog, which occurs suddenly, absorbs the surrounding countryside and suddenly disappears as well. Dartmoor landscape has always been an inspiration for writers and ideal for creating mystical and sometimes spooky stories. The park is connected with many legends about the mysterious unknown characters and bloodthirsty monsters. It is a place where the legend about a Baskervilles Dog was born. There are constant rains, strong winds, foggy weather and damp. Gloomy atmosphere of this area is also doubled with the famous Dartmoor prison, which was built in 1806 here and was used for the prisoners of the Napoleonic wars. The local largest village of Princetown once served as a hostel for prison staff.

Since 1951, Dartmoor National Park includes also a huge swamp of the total size of 945 km2. First settlements dating back more than 10 000 years, when it was still densely forested plateau. The felling of local forests started in the Stone Age, when the hunters and gatherers tried to get as close as possible to the animals. Also the first agricultural settlements were established here in the Early Stone Age. During the Bronze Age was that landscape completely without forests. There were found the remains of settlements from the Bronze Age, such as houses, yards, burial grounds, megalithic series, stone circles and obelisks having religious significance. There are also the remains of stone walls that were delimiting the pastures and fields, which prove the early human existence. The objects that people used everyday, such as ceramics, various metal objects or bones, were unfortunately not preserved at all. 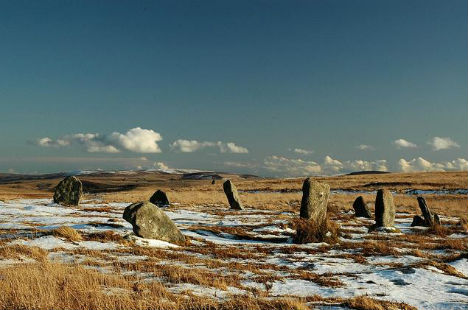 Dartmoor National Park protects a number of rare habitats. The central part of Dartmoor is composed of a large marshy area. The surrounding terrain is a combination of moorland and meadows, and in the valleys you can find oak forests. Typical for this landscape are also granite rocks – “tors” and roaring rivers falling into deep gorges, cave systems and limestone ridges. There were found the remains of prehistoric animals in the local caves. This collection of the remains is one of the largest in Great Britain and its age is estimated to more than 150 thousand years. For example, in a cave Joint Mitnor Cave were discovered the bones of hippos, hyenas, lions, wild pigs and even Straight-tusked Elephants.

The largest part of the national park is covered with the rare mud. Dartmoor bogs have a depth of at least half a meter, but there are also places where they reach even a depth of 7 metres. In the park there is also very rare Tor Royal Bog, covering an area of 8 km2. National Park became home to a large number of marsh birds. 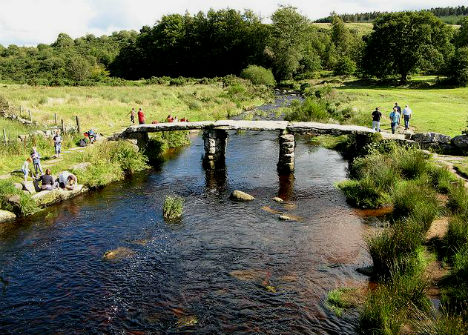 Photo licensed under the Creative Commons, created by Michal Stehlík

In the Dartmoor National Park you can even find very interesting sight. It is a large Merrivale megalithic complex. You can also visit the Postbridge, sometimes called the Clapper Bridge. This is the most beautiful and best preserved bridge from all the bridges built in this area during the 13th and 14th centuries.

Necessary equipment for hiking along this marshy landscape is the compass and actual map. So do not forget them!

« San Pietro in Vincoli – home of Michelangelo’s statue of Moses | Rome, Italy
Muskau Park – largest and one of the most famous English gardens of Germany and Poland »