St. Paul´s Cathedral – one of the major landmarks of London | United Kingdom

St. Paul’s Cathedral is one of the major landmarks of the British capital of London and has a completely sovereign status among the all church buildings. It is also the second largest religious building in the United Kingdom (after Liverpool Cathedral), whose unmistakable dome inherently belongs to the eastern part of the city skyline. 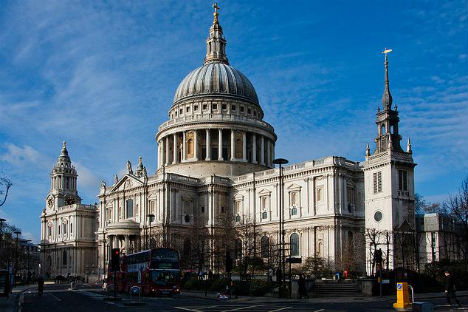 Photo licensed under the Creative Commons, created by Garry Knight

The cathedral rises on a Ludgate Hill, offering a beautiful view not only of the roofs of surrounding houses, but also on the nearby River Thames. The place where the cathedral stands, belonged to the church purposes from time immemorial, and so St. Paul’s Cathedral is the fifth church that was built here. The first wooden church has already been here in the 7th century. However it took many centuries until the present cathedral was built here. The former buildings were destroyed especially by numerous fires. Churches have always been newly refurbished and underwent many modifications, especially during the Middle Ages.

The worst time in the history of the cathedral was the September 2nd, 1666, during London’s Great Fire, when the four fifths of the former metropolis were completely destroyed, including the cathedral. 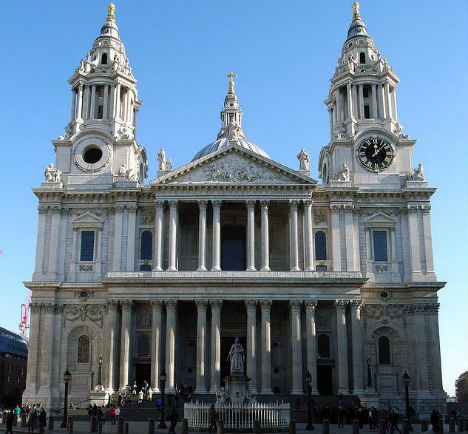 Photo licensed under the Creative Commons, created by Steve Cadman

The creation of a new model of church is credited with one of the greatest masters of that time – Sir Christopher Wren. Construction started in 1675 and was completed many years later – in 1710. Once the cathedral was completed, it was the third longest church in Europe with a length of 181m, and boasted a 149 m high tower.

Today, St. Paul’s Cathedral is the most beautiful old building in London, still used for regular worship, but also to the extraordinary and monitored events worldwide. In 1965 it became the scene of the funeral of Prime Minister and Nobel Prize winner for literature, Sir Winston Churchill, who is considered one of the leading statesmen of the 20th century. His funeral was at the same time the show of the world political figures, which has been overcome by the funeral of Pope John Paul II. in 2005. In July 1981, the cathedral was a place of the marriage of Princess Diana and Prince Charles.

View St. Paul´s Cathedral – one of the major landmarks of London United Kingdom in a larger map

Cathedral impresses every visitor especially its western facade, which is well-illuminated in the evening. The cathedral is heavily decorated with numerous architectural features. The most richly decorated part is the altar area, where you can see spectacular, sophisticated gilded mosaics with images of birds, fish, animals and nature. In the south aisle of the cathedral there is a unique and even the only completely preserved statue from the old St. Paul’s Cathedral. The statue is a portrait of the poet John Donne, who was a preacher and Dean of St Paul’s Cathedral.

The cathedral is easily accessible by subway Central.

View St. Paul´s Cathedral – one of the major landmarks of London United Kingdom in a larger map