In the heart of Milan stands huge dome, one of the largest Gothic cathedrals in the world – Milan Cathedral (Duomo di Milano). At its widest point measures 92 meters and is 157 metres long. Construction started in the 14th century under Duke Gian Galeazzo Visconti, but finished up by more than 500 years later. The last work has been performed in order of Napoleon in 1809. Facade of the Milan Cathedral is a dazzling combination of Gothic and Baroque styles. 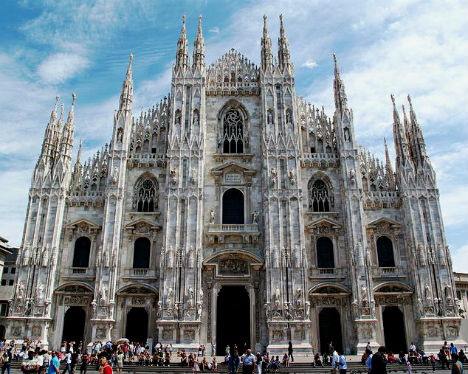 Photo licensed under the Creative Commons, created by schizoform

The most striking feature is the unusual dome’s roof with 135 towers and innumerable statues and gargoyles. In clear weather you can see the Alps with the Matterhorn from the towers. For the lovers of Gothic architecture, the Duomo is a masterpiece of perfectly made ​​decorations.

Cathedral windows dating from the 15th century, are among the largest in Europe. In the nave, near the entrance, you can see the largest sundial in the world (dating back to 1786). 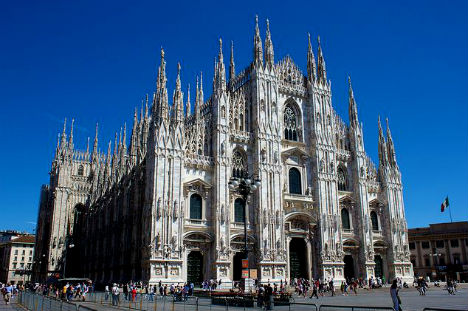 Photo licensed under the Creative Commons, created by Jiuguang Wang

Milan Cathedral is considered to be one of the most popular buildings in the whole European continent. It is also known to be the largest cathedral of all cathedrals in Italy and the second largest one in Europe (just after Seville Cathedral). It consists of five naves, which supports 52 columns. The highest point of the cathedral is La Madonnina (the statue of the Virgin Mary) from the 18th century, which is now the symbol of Milan.

The project of cathedral was meant to help all those who are helpless and ordinary people who are suffering or suffered under the ruling of tyrant Bernabò. During the construction of this cathedral a large amount of donations were collected from people and soon the news of construction spread with the people.