Religious heart of the city of Florence, which is known as the European Capital of Art, is certainly the Piazza del Duomo. It is a place where you can find magnificent Basilica di Santa Maria del Fiore, known simply as the Duomo or Florence Cathedral. It is essential symbol of this Italian city, hiding masterpieces of medieval architecture and art. 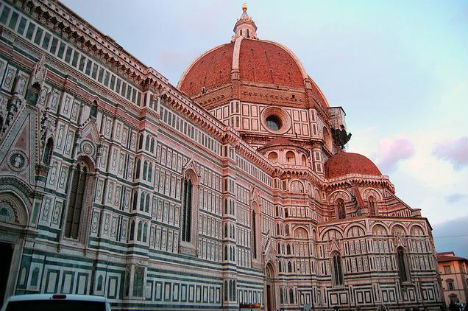 Photo licensed under the Creative Commons, created by McPig

Florence Cathedral is the fourth largest in Europe. Its construction started in 1296 by architect Arnolfo di Cambio. The main task of the architect was to create a huge cathedral, which size would express the growing importance of Florence, and overshadow the cathedrals in the competing cities, such as Siena and Pisa. Finally, there was built a huge, 106 meter high building that really can not be overlooked. Moreover, it is complemented by the largest dome since antiquity period. This masterpiece of medieval architecture was designed by Filippo Brunelleschi. The dedication of the cathedral was in 1436. The original facade, of which only a quarter was completed by Arnolfo di Cambio was removed in 1587. The present appearance dates back to 1887, when the Florence Cathedral got the colourful Neo-Gothic facade. 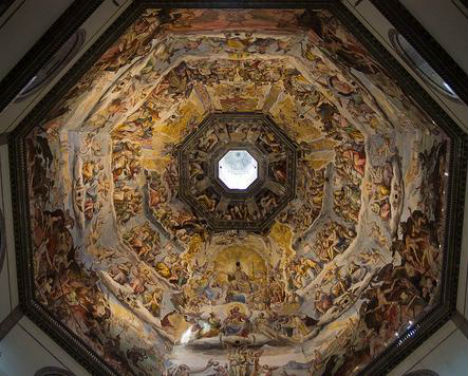 Photo licensed under the Creative Commons, created by Ed Webster

Rich outdoor decor contrasts markedly with, at first sight, a simple interior. The building is so obvious that the main aim of the architects was the size. However, if you look carefully, you discover a surprising number of art treasures. One of them is the crypt, where can be seen remains of the former church of Santa Reparata, and the dome, which is a masterful architectural work of Brunelleschi, and which offers a beautiful view of Florence. 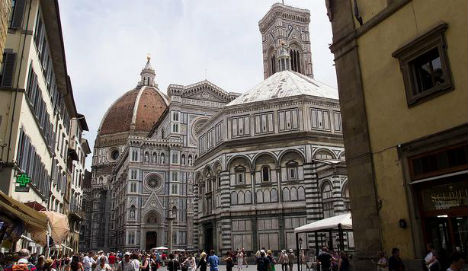 Photo licensed under the Creative Commons, created by Ed Webster

In Florence Cathedral you can also admire great paintings. On the left side you can see such as Dante and the Divine Comedy by Domenico di Micheli, equestrian portraits of Sir John Hawkwood by Paolo Uccello or Niccolo da Tolentino by Andrea del Castagno.

The real treasures of the Cathedral of Santa Maria del Fiore include two sacristy. Sacrestia Nuova, which is the work of Michelozzo and Luca della Robbia, is paneled with wood and protected by a bronze gate. Above the entrance is a blue and white terra-cotta roundels from 1442 also by Luca della Robbia. By contrast, there is Sacrestia Vecchia, which is adorned with a similar roundels from the same artist. Between those two sacristies is the central apse, which houses the magnificent bronze reliquary in which are deposited the remains of the first bishop of Florence, Saint Zenobius.