La Gomera is a volcanic island and the second smallest island of the Spanish Canary Islands. One third of the island is a part of the Garajonay national park (Parque nacional de Garajonay), which was established here in 1981 and is listed on the UNESCO World Heritage List. About 40 square kilometres is covered by ancient subtropical laurel forests, which thrive here thanks to the cool and wet climate. With peace and quiet that featuring this island, it is an ideal place to spend a pleasant holiday. 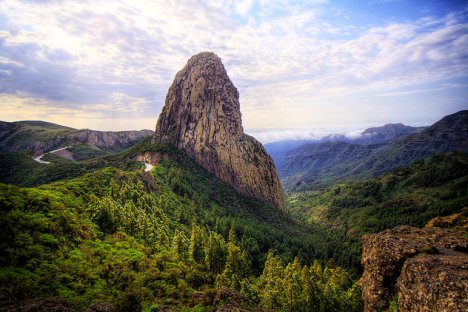 Photo licensed under the Creative Commons, created by Till Krech

Garajonay National Park includes also a mountain massif Garajonay that reaches an altitude of 1487 meters and such it is the highest point of the island. From here, during nice weather you can enjoy a beautiful view over the Atlantic Ocean and the other islands of the Canary Archipelago, El Hierro, La Palma, Tenerife and Gran Canaria. Foot of the mountain is covered by the dense forest, on the drier side it is formed by gale and tree heath. These shrubs are reaching heights over 15 meters. Because of their non-combustible timber, they are used in production of pipes. Laurel forest grows on the northern and northeastern slopes. These trees boasts a large, solid, and shiny green leaves. 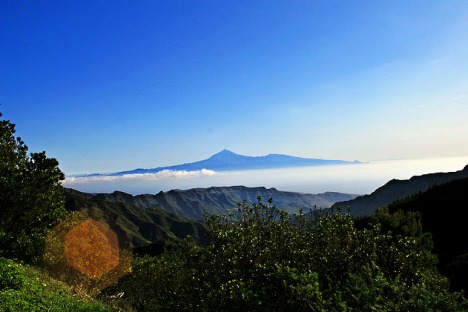 The climate on La Gomera is cooler than on the other islands, even though this area is known for its dry climate. Deep green forests provide a pleasant relax during the hot days. The air is usually cool and moist, it rains almost constantly during the summer. This is due to the action of trade winds that are coming from the northeast, which brings permanent moisture from the Atlantic Ocean. This phenomenon is important in terms of the water regime of the island, because about two-thirds of drinking water are formed by this way. The sunny parts of the forest feature a number of blooming flowers. You can also find almost two meters high fern, which prevent from the smooth walking through the jungle. The local lush vegetation includes 20 metres high trees, which are densely covered with moss. La Gomera is also a home to around 100,000 palm trees, which is the most of all the Canary Islands. Half of them are Canary palms, whose sap is used for production of an edible sweet syrup called also a palm honey. The other half are African palms. In addition to this interesting and unique vegetation, island boats numerous gorges, rock cones and rocks, which descend deep into the sea. Among the most beautiful valley on the island is Gran Rey. 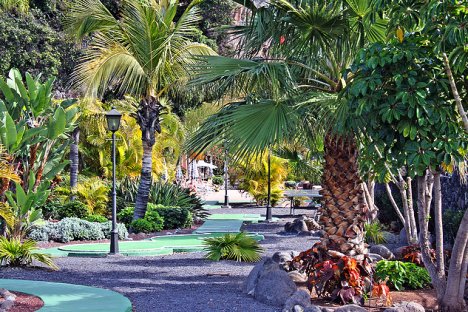 More than 450 species of plants grows on La Gomera. Some of these species are endemic and can not be found anywhere else in the world, such as Canarian mahogany and ebony. In the Tertiary period laurel forests covered an area of northern Africa and parts of southeastern Europe. Their demise was due to temperature fluctuations in times of Ice age and subsequent deforestation. Laurel forest in the Garajonay national park is the last surviving example of those forests. Since it is not destroyed, it is called a living fossil.

The island of La Gomera was created by the volcanic eruption and the last eruption is dated to the Quaternary period. Volcanic chimneys spewed basalt and ash that settled in the layers. Those were then burned by hot lava. Long ago, the island was much larger, but due to the erosion has shrunk by more than half into the present area of ​​370 km2. 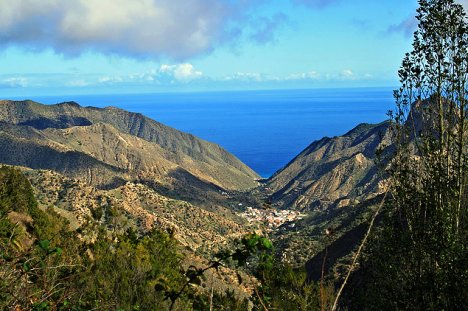 Since it is a popular tourist area there are lots of accommodation options of all categories on the island of La Gomera. The beaches are mostly rocky.

The capital of the island is San Sebastian, which was a popular port of Christopher Columbus. Among the known historical villages are the Valle Gran Rey, Chipude, Agulo and Arure. An interesting feature of the island is that the locals communicated by whistling. This language is called El Silbo or Silbo Gomero and is still used by some people, because such they can communicate over long distances (3-4 km).