The first ice hotel in Netherlands – enjoy sleeping in 6°C

It could be an ordinary hotel room like any other one in an inconspicuous town of Zwolle in the northeast of the Netherlands. Here, just like elsewhere, you can find a bed, minibar, bathrobes and two pairs of slippers. An exception, however, is the temperature, that reaches only a few degrees above zero in the room. Welcome to the first Dutch ice hotel! 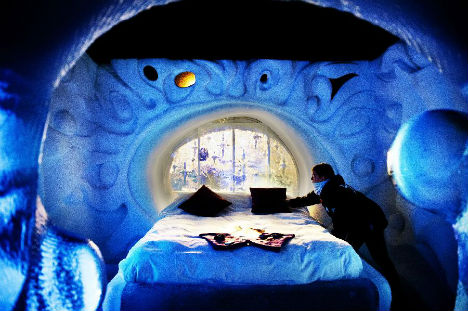 “If you want to take a shower before you go to bed, make sure to dry your hair, or they can get frozen. Do not drink too much alcohol and do not eat any heavy food. Make sure to change into dry and warm clothes,” says hotel manager Annet van Limburg to the visitors.

The unique hotel was opened in Zwolle on the occasion of the ice sculptures festival on 3rd December last year and will remain in operation until 29th January 2012. There are three rooms, the construction of which lasted ten days. Unlike similar projects, such as those in Canada or Sweden, the hotel is built inside a large freezer warehouse, not in the nature.

The dominant feature of the rooms, which are made of the giant block of ice, is a great double bed, coloured with pink, green and blue light from lamps, installed under the ice. Ice walls which are 1 meter thick, are decorated with abstract patterns. If you are interested in spending the night in such unique ice hotel, prepare €199 for one night with breakfast for two.

How to sleep in six degrees?
The temperature in the room is between six to eight degrees Celsius. “If you are healthy, it is not dangerous,” says Annet van Limburg assuring potential guests. However if the guests during the night change their minds and want to leave the room, they can use the nearby hotels, where the hotel taxi takes them to for free.

Ice Hotel in Zwolle is unique not only in the Netherlands, but it is also the first hotel of its kind, ever opened such a lot on the south of Europe. The greatest ice hotel in Europe and perhaps in the whole world is an ice hotel in Jukkasjärvi in Sweden, which boasts a total of 47 rooms.