Croagh Patrick – one of the world’s largest Christian pilgrimages | Ireland

To the west of Ireland, over the southern shore of Clew Bay, you can find the mountain Croagh Patrick. It is the subject of many legends and a place of one of the largest Christian pilgrimages of the world. 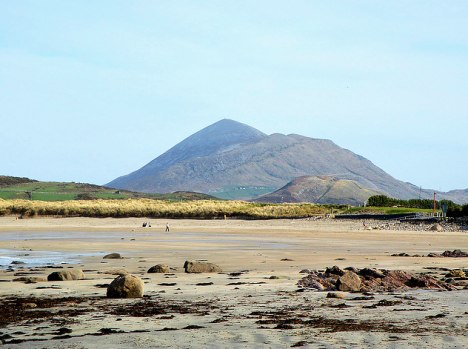 Photo licensed under the Creative Commons, created by Kat Hamilton

The name “Croagh” in Irish means “hill”. This 764 m high Patrick’s hill is really the dominant element of the landscape, towering above the rocky wastes of the surrounding moors. According to legend, Saint Patrick came to County Mayo in 441 during his great missionary expedition through Ireland. The first Saturday of Lent ascended to the top of the Cruachan Aigil mountain (as the hill was named before) to which the local pagans felt a certain awe. But he did not intend to leave the place with such spiritual significance for thousands of potential Christians. He stayed in the mountain for a period of 40 days, keeping fasting and praying for the Irish. It seemed to be very brave to the local residents, because they believed that the top of the hill was inhabited by demons. When he came back down, people were more amenable to his mission, they had baptized and demanded redemption.

This story that happened on Croagh Patrick became the subject of many other stories and legends, which mix truth, myth and symbolism. It is said, that Saint Patrick assured God that the Irish people never loose their faith and on Judgement Day will be saved. 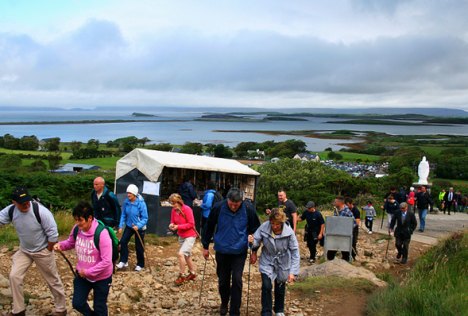 Photo licensed under the Creative Commons, created by Eoin O’Mahony

It didn’t take a long time and Croagh Patrick mountain has become a popular place of pilgrimage for the entire Christian Ireland. For more than 1500 years thousands of pilgrims climbed to the top, despite of criminal law, prohibitions or bad weather. 37-kilometres long pilgrimage trail called Tóchar Phádraig begins in Ballintubber Abbey and leads along the ancient pagan way to the top. The trail is quite challenging and tiring, but purifies the body and spirit. As a compensation is the unbelievable view of the surrounding countryside. Those who think the entire 37 km long trail is too long, may choose a shorter trail, which begins in Murrisk.

Climbing the holy mountain of Croagh Patrick has become a traditional activity not only for locals but also for visitors from abroad. For the climbing you need good hiking boots, a stick and a lot of determination. The route is viable, so you do not need to be in any special form.

Ancient pilgrimage trail leads through an interesting landscape dotted with many monuments. There are holy wells, menhirs, rocks engraved with inscriptions, magical piles of stones and allegedly enchanted forests. It takes two days to walk through the 37 km long trail. The best place for rest and overnight stay is Aghagower village boasting an ancient church and round tower. The next day, you can then continue further west along the path until you get to the saddle and then up to the peak.