Daugavpils is the second largest city of Latvia, and also the metropolis of the south-eastern part of country, situated near the border with Lithuania and Belarus. It was founded in 1275, when was built a Dünaburg castle here at the river Daugava, Latvia’s “mother river”. Today the city is slowly recovering from the Soviet era and is still a blend of beautiful historic architecture and postwar Soviet architecture. 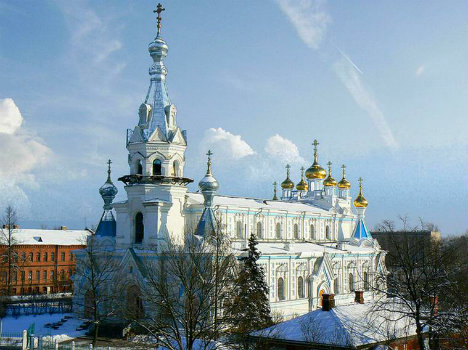 However the first things you notice on your arrival from the south is the sky full of smoking chimneys and gray massive prison. But, the city centre, consisting of a grid of straight streets, hides some gems that are worth your attention.

The dominant feature of Daugavpils’s city centre is three-aisled St. Boris and Gleb Orthodox Cathedral, built in the neo-Russian style. This great structure with a total of ten towers culminating in a gilded dome, rises on a hill along with two other temples. Towers of these sanctuaries create a unique cityscape.

The most notable monument of Daugavpils is a huge fortification built in 1810 by the Russians during the Napoleonic wars. There is also a war memorial, which recalls that during the World War II, the city was a place of a concentration camp Stalag. The fort is considered the largest of its kind in Europe. Museum of Regional History and Art guarded by stone lions is also worth a visit as well as a large sports complex, which is situated in one of the few really modern buildings in the city. Daugavpils is now slowly changing into a friendly town with lots of green areas and a good range of services and recreational facilities for its residents and visitors.