Aix en Provence is ​​a university city, that is still full of life. It is the city of Paul Cézanne (French artist and Post-Impressionist painter), Émile Zola (French writer) and Victor Vaserly (French painter of Hungarian origin). After a while you understand why they come for inspiration right here. 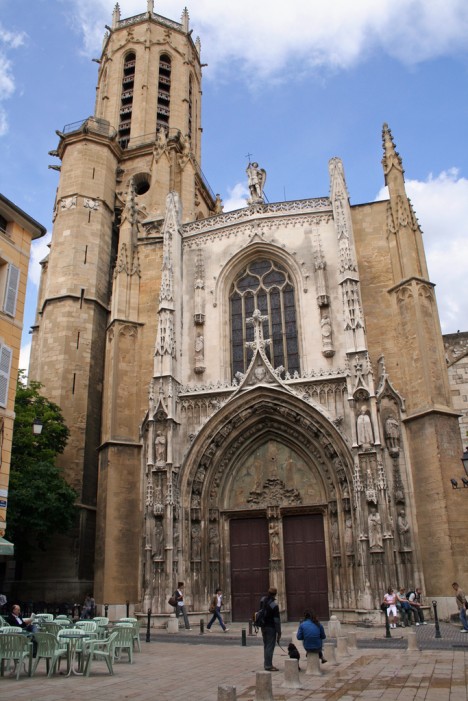 The city boasts Roman remains mixed with the traditional medieval network of streets, facades from the 18th century, fountains and springs. All of that is featured by the latest amenities of our time, because the inhabitants of Aix (mainly students) are very active and modern. In summer it is impossible to come here and not to see any of numerous cultural events.

Almost in every corner you will find well done facade, stone fountain, simply a lot of interesting things. That is how I think is the best way to know Aix.

You, however, should know that in a short visit to the city you can not catch and see everything the city has to offer, because it is really much.

This black and white museum is built in a charming contrast to the green hills around. It was designed in the 70′s of the last century by Victor Vaserly, the father of Op Art, a method of painting, which developed after Pop art.

Vasarely was born in Budapest, spent his childhood in the Slovak Republic, and after the wedding with his French wife he lived in France. Glass building itself is an optical illusion, a few are exposed to some hexagone Vasarely works.

Cézanne’s trail that leads through Aix takes approximately two-hour. It is marked with gold signs and show you Cézanne’s favorite cafes and its birthplace. At the end of the trail is Cézanne’s studio, where you can see a tray with fresh apples arranged every day, coat hanging in the corner and the chair pushed away from the table, so here you have the impression that the artist has just left to the garden. From the windows you can see a landscape that inspired Paul Cézanne all the time, so do not hesitate and be inspired too.

In the summer months the garden holds an evening concerts or even a night exhibitions. More detailed information can be found on the studio website: www.atelier-cezanne.com

The cathedral was built between the 11th and 13th century. As a result it is a mixture of the Romanesque, Gothic and Baroque styles. During your visit do not miss to get to the monastic tower from the 12th century. It is one of the most interesting places of the cathedral, and its top also offers beautiful views of the octagonal belfry and the surroundings.

During the French Revolution, citizens of the town cut off all the statues on the cathedral’s head, the statues were returned back in the 19th century despite the fact that the most heads had no neck.