Almuñécar is very important tourist resort in Spain, situated on the Tropical Coast (Costa Tropical), between the sea and mountains in Granada province. Currently it has about 25 000 inhabitants. The name of this town dates back to the Arabs, when it was named HiSn-al-Munakkab (Surrounded by mountains). 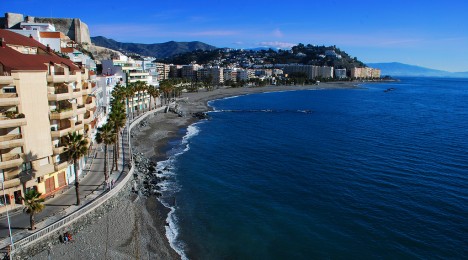 Photo licensed under the Creative Commons, created by Andrew Hurley

From the Arab period you can see well preserved Castillo de San Miguel and the towers, protecting the city against enemies approaching by sea. The towers are preserved in almost perfect condition today. From an earlier Phoenician Period comes the necropolis Puente de Noy. During excavations in the years 1979 to 1993 were discovered 132 tombs, which provide convincing evidence of ancient inhabitants of this place.

Quite a lot monuments date back to the period of Roman domination. Those include the Aqueduct and Cave of the Seven Palaces, which now serves as an archaeological museum. From this time you will find also the Monks Tower and even Factoria de Salazones de Pescado (Salting FishH Factory).

Encarnación church was designed by famed architect of King Philip II., Juan de Herrera. The author of its tower then became a Granada’s native Diego de Siloé, who mainly participated on the most part of the Cathedral of Granada. 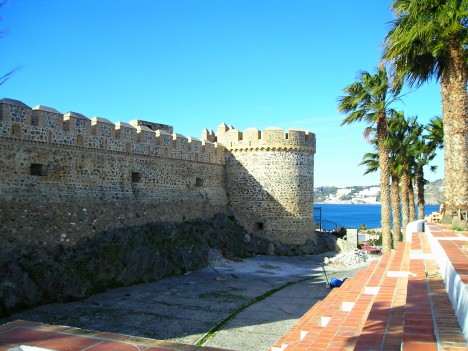 Photo licensed under the Creative Commons, created by NoelWalley at en.wikipedia

Approx. 40 minutes from Almuñécar you can visit Peña Escrita natural park where you suddenly find yourself almost in paradise. You will see beautiful countryside surrounded by mountains on one side and sea on the other. It’s a great tip for a nice walk, when you go around wonderful nature that is full of various animals and birds singing.

Beaches are very natural and not as commercial as they are on the Costa del Sol.

Playa de Cantarrijan
This beach lies exactly on the boundary of two provinces, Malaga and Granada. You can get here from the national road No. 340 and you have two options. Either you walk down the path that is steep and sometimes you come across a smaller gradient, or choose the second one, which is milder but longer.

Playa La Herradura
It is 2100 m long beach. From both sides is protected by foothills of La Punta de la Mona and Cerro Gordo mountains.

Playa del Muerto
Do not be intimidated by the title (in translation beach deceased). The name is probably derived from the peace and quiet to be found there. It is a small beach (280 meters long) which you can enter by following an artificial rocky road.

Playa de San Cristóbal
One of the most famous beaches of this area lies to the west of Almuñécar. Besides the beach you can go to several bars and restaurants and enjoy some of the excellent local cuisine.

If you did not choose any from these beaches, you certainly do so once you get there. There’s a lot more!