Home » Nature » Mountains » The French volcanoes in the region of Auvergne

France is such a big country that you can see here perhaps all types of landscape. But the majority of the people has no idea that the French mountains also hide probably the most beautiful volcanic landscape of continental Europe, protected by the Auvergne Volcanic Regional Nature Park. 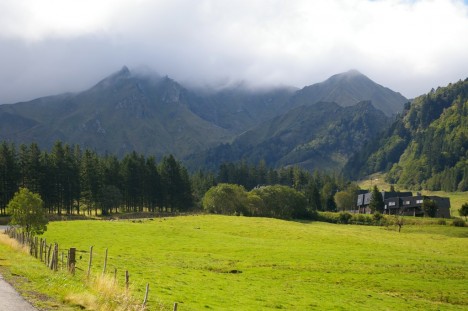 Photo licensed under the Creative Commons, created by sybarite48

The area of ​​extinct volcanoes is located in the southern part of central France and administratively falls under the region of Auvergne. Volcanic rocks (the rocks resulting from volcanic activity) are divided into four smaller areas. In order from south to north they are Monts du Cantal, Cézallier, Monts Dore and the Chaîne des Puys.

The southernmost mountain is Monts du Cantal, consisting of a single giant stratovolcano (a volcano composed of layers of lava and pyroclastic rocks) with a diameter of 50 km. Originally it was 3,000 metres high and was created by multiple eruptions relatively recently – in the period before 13 to 2 million years ago. French claims that it is Europe’s largest stratovolcano. The whole Cantal mountains were covered with glaciers in the Quaternary. If you want to enjoy distant views you can get up to the Puy Mary (1787 m) – on the way you will see number of flowers in mountain meadows, lots of cows, whose milk is used to produce excellent cheeses, including Cantal cheese, known throughout France and delivered already to the court of Louis XIV.

A little further north lies Cézallier area, the least attractive for tourists, consisting of basalt lava flows that originated from 8 to 3 million years ago. 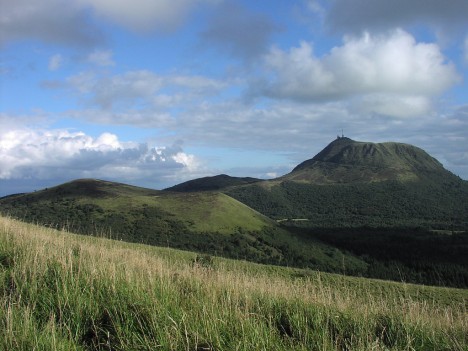 Photo licensed under the Creative Commons, created by Sébastien Bertrand

Much more attractive is the third area – Monts Dore with the highest peak of the Puy de Sancy (1,885 meters). It is also a stratovolcano, but smaller and younger. It was created 3 million years ago by a huge volcanic eruption that created a great caldera (a large circular or elliptical crater) consisting of layers of acid ignimbrite and trachyandesite lava flows. View of the eruption must have been really impressive, but also malignant for all living in the vicinity. Fine ash fell even hundreds of miles away. Crater reached a height of up to 2 500 meters. Volcanic activity then continued until about 200,000 years ago and later even erosion and glacier topography changed the original caldera. To the top of the Puy de Sancy you can get by a cable car and then walking for about 20 minutes. The reward is again superb view (in good weather you can even see Mont Blanc) and flowering alpine meadows.

But the most beautiful and most attractive is the last part – the northernmost areas of the chain of volcanoes Chaîne des Puys. On a line about 40 kilometers long, were created up to 48 volcanic cones, lava domes and maar. The youngest is the volcano Puy de Paria. This is a typical type of Stromboli volcano and you can still see beautifully preserved crater here. The landmark of this part is the Puy de Dôme volcano, created about about 12,000 years ago. The peak is a popular place for hang gliders or paragliders. View from the top is really worth and during the nice weather you will see the horizon of the Alps.