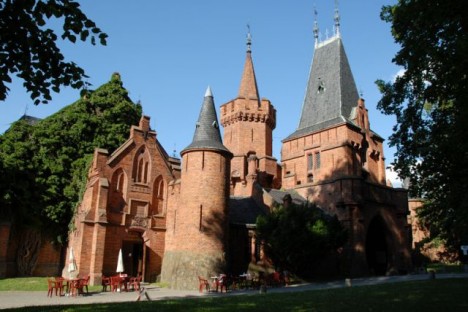 Slavic people settled at this place already at the end of 8th century. In the 11th century Slavic settlement turned into a royal castle of the Přemyslids. After next 200 years it was rebuilt by Czech King Premysl Otakar II. into the palatial castle protected by a massive fortification. In 1531 the castle burned down, but despite major repairs still holds its medieval appearance.

The total reconstruction was done in the late 16th century by Kaspar Pruskovský from Pruskov, who in 1585 inherited this property. At the castle was established ornamental garden with a breeding pond Pilar.

In February 1796 a renaissance castle was badly damaged by fire. A year later started its reconstruction, which not only brought substantial changes to exteriors, but also a fundamental change in the surroundings. The chateau was rebuilt into the form that has survived with minor changes until today. One of the first guests in the renovated castle was composer Ludwig van Beethoven, who stayed here between 1806 – 1811. A little later the castle even welcomed Niccolò Paganini and in 1846 and 1848 also hosted the pianist and composer Franz Liszt.

The second half of the 19th century brought another neo-Gothic transformation. The most important building of that time was an economic extension of the Red Castle dating from 1874 – 1895 and the White Tower.

The castle Hradec nad Moravicí became in 2002 a national cultural monument, and is an important center of social events.