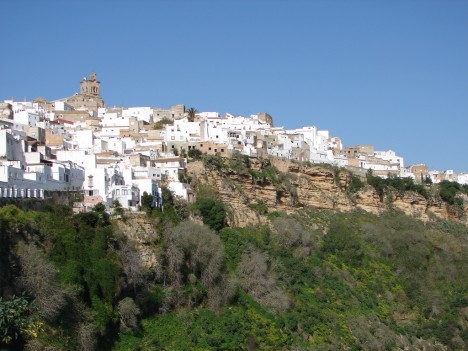 Photo licensed under the Creative Commons, created by Iain and Sarah

The Romans called it Arx-Arcis (high fortress), the Arabs renamed it to Medina-Arkos. And it was just Arab civilization that created an unmistakable appearance of the village. At this time Arcos became very important and prosperous town. In the 19th century there were a number of policy changes. Arcos was also a home to José I Bonaparte for some time. Today the village is a very important breeding cattle and agricultural centre. It has a strong aroma of olive trees, orange trees and fruit orchards.

The historic center of Arcos is really rich in monuments. One of the most important ones is Basilica de Santa María de la Asunción which is the oldest in Arcos. It was built at the turn of the 13th and 14th centuries on the ruins of Arab mosque. A visit will costs you €1.50.

Another interesting sight is Torre de Santa Maria. This tower offers a really wonderful view of the city and its surroundings. It is a place where you can find the ancient bells of the 15th century, which are valued as the most beautiful in Andalucia. The tower is opened every day from 10:30 to 18:30.

The village has also the castle Castillo de Arcos that served as the fortress during the Arab period, although its appearance looks more like it was from the 15th century.