You’ve decided on visiting The Netherlands. You have your luggage and camera ready, your passport is good to go, your packing to-do list is set. But you’re not quite sure what to see once you arrive. Let’s take a look at five of the most famous cities in this country to find the best attractions. 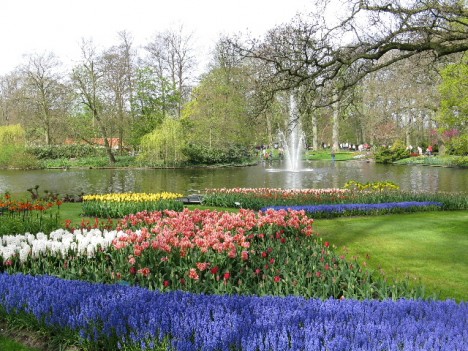 Photo licensed under the Creative Commons, created by penwin

First, have you ever seen photos of fields of flowers — that look more like bold, dramatic stripes that go on forever? Well, you were probably looking at images from Keukenhof; it’s the largest flower garden in the world, and is known as “The Garden of Europe.” From March to May, you’ll see long rows of blooms in hues such as purple, yellow and red. About seven million flower bulbs are planted each year. It really is a spectacle not to be missed. You’ll find dining and accommodations at fine establishments such as Restaurant-Hotel Savelberg and NH Zandvoort.

Next, travel over to Rotterdam, the second biggest city in this country. Here you’ll find the largest shipping port in Europe — and because of its vast commerce network, Rotterdam is known as “The Gateway to Europe.” Home of Erasmus University, this city was almost completely destroyed by bombing during World War II. It now, however, is a thriving metropolitan area that hosts several cultural festivals each year, such as for film and music. For meals, step inside Izakaya or Restaurant Ivy, and stay overnight at Hotel van Walsum or Hotel New York.

Another must-see, especially for pottery lovers and history buffs, is Delft. The old city of Delft holds much history — including tales about William of Orange — and is home to the famous blue pottery, which several factories there make. But take a tour at the Royal Dutch Delftware Factory to see just exactly how it’s made. For staying overnight, try Van Der Dussen or Matties. Restaurants worth trying include Hampshire Hotel and Bridges House Hotel.

No trip to the Netherlands would be complete without stopping by Amsterdam — home of the Van Gogh Museum and the Anne Frank House. You might like to rent an apartment for the duration of your stay, and if so, renting one of the many Amsterdam apartments might even be less expensive than hotel rooms. Some Amsterdam accommodations include those in the heart of the city and on the outskirts. If being on your own and experiencing this city by blending in with the locals is for you, then renting your own apartment for the holiday. Check out the local cuisine too, such as found at De Kas and the Pancake Bakery.

Finally, stop by Alkmaar. There you’ll discover the Cheese Museum. If you’re a fan of the culinary arts, you won’t want to miss this tour. Also, grab a bite to eat at Hof van Alkmaar or Portofino. If you stay overnight, try the Grand Hotel Alkmaar or the Golden Tulip.
With these top-five cities on your itinerary, you’ll store up a lifetime of memories, and your entire trip will be packed full of excitement. Do your research before you go, and you’ll have an appreciation of the Netherlands that will forever stay with you.

Robin Sharman is a travel blogger who writes about places to visit all over Europe.  A keen traveller, Robin also recommends renting apartments in Rome, Paris and London instead of always going to hotels.

View Five Most Famous Dutch Attractions in a larger map