It was a May Day tradition in Oxford that had been stopped for five years due to safety concerns, but after the success of the Magdalen Bridge celebration last year it’s set to go ahead in 2012. 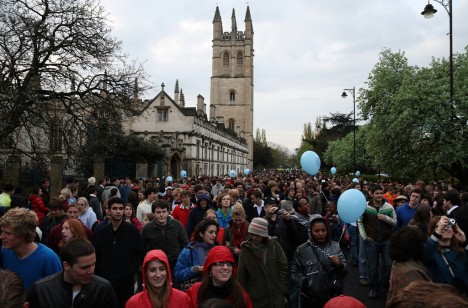 Photo licensed under the Creative Commons, created by Danny Chapman

Last year 18,000 people gathered by and on the bridge at 6am to listen to a traditional hymn sung from the Magdalen College tower by the Magdalen College Boys’ Choir. It became a tradition in the 1970s to jump off the bridge but Oxford City Council are strongly advising against doing so this year as it can be extremely dangerous, but especially so this year because of the drought and low water levels. In 2005 40 people were hurt jumping from the bridge costing the NHS tens of thousands of pounds, but last year went off “without incident” so everybody is looking forward to this year’s celebration.

At the beginning of May the city of Oxford takes on a very Pagan feel as Morris Dancers come out in their flowers, bells, abd their handkerchiefs or batons. There are several versions of the Morris Dance depending on which part of the country you are in, for example in Yorkshire there is a version using swords; or along the Welsh-English border the men paint their faces black and have feathers in their hats instead of flowers. Its origins are thought to be Moorish, dating back to the mid-15th century when the Moors were in retreat from Spain, and the dances were held in honour of the Spanish monarchy. Nonetheless, it is now recognised as a very English celebration. Here’s a short video of some Oxford men in action: https://www.youtube.com/watch?v=3ZHgYX6dRrs

If you’re lucky enough to catch the good weather you could take an official guided walking tour following in the footsteps of Inspector Morse, the city’s most famous fictional detective. You could also take one of the other themed tours which include CS Lewis & JRR Tolkien, or the Gargoyles & Grotesques Tour of the fantastic stone creatures that adorn the churches and ancient buildings, meant to scare away evil spirits.

Oxford also has one of the most famous universities in the world, and is the oldest in the English-speaking world having existed for over 900 years. It’s made up of 38 colleges each with its own unique characteristics. Some of the most famous are Christ Church, whose Great Hall inspired the design for the hall at Hogwarts in the Harry Potter movies, the Magdalen tower dominates the High Street, and the crypt at St Edmund Hall has a spooky atmosphere second to none.

The historic Bodleian Library is the largest university library in the UK with over nine-million printed books. You’ll be in good company when you visit as the footsteps as five kings, 40 Nobel Prize winners and 25 Prime Ministers have been heard walking through these halls.

Hotels in Oxford have a class that credit this historic city, and if you can find a place to stay close to the city’s old centre, even in one weekend you’ll have ample time to see the best it has to offer.

Catherine Halsey writes for a digital marketing agency on a range of subjects. This article links back to https://www.macdonaldhotels.co.uk/our-hotels/macdonald-randolph-hotel/