The Nice Jazz Festival: Fun in the Sun | France

Described by Frommer´s as “the biggest, flashiest and most prestigious Jazz festival in Europe,” the enigmatic Nice Jazz Festival is a must for all Jazz lovers. It has been a permanent fixture on the list of annual events in Nice, France since 1948, and the line-up in 2012 promises to be as good as ever.

Because of its American influences, Jazz was not initially well received in France, but once French musicians adopted their own style in the 1920´s, a take on traditional folk music and “gypsy jazz,” it became increasingly more popular and since the 1930´s has become a quintessential part of the French music scene. 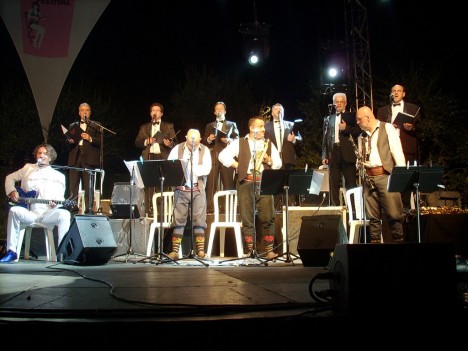 Photo licensed under the Creative Commons, created by bastien09

The Beginnings of the Nice Jazz Festival

During the Second World War, the Americans ironically influenced the Parisian Jazz scene and their new and exciting brand of bop music caught the attention of Christian Estrosi, the Deputy Mayor of Nice. In 1948, he wanted to give something back to the people of the Cote d´Azur and on the 28th February, the world´s first ever Jazz festival was organised in Nice´s Pleyel auditorium.

Because the two styles conflicted with French audiences, the first festival got mixed reviews and unleashed passion and repulsion in equal measures from commentators. There was somewhat of a hostile feeling towards the new American style of bop whereas the “old French style,” was much revered.  It was a gap that would keep widening until the 1970´s when modern jazz partisans revolutionized American influences and again used the Nice Jazz Festival to pioneer the growing new trends.

One of the qualities of the Nice Jazz festival is to extend this special brand of music to a wider audience other than a restricted circle of Jazz connoisseurs and subsequently the spirit of open-mindedness would reach new peaks in 1972 with the likes of Dizzy Gillespie, Max Roach and Charles Mingus. Today Nice´s Jazz Festival stages a wide variety of Jazz influences and styles. These range from urban funk to gospel, urban funk and jazz originating from Africa.

There´s more to Nice than Jazz

Nice is recognised as a jewel in the crown of France´s glamorous Cote d´Azur and with its cosmopolitan ambience, radiant landscapes and relaxed atmosphere has plenty to offer sun seekers, culture vultures and sight-seers.

The stunning scenery along the Bay of Angels and the bustling promenade des Anglais is where most tourists and chic locals congregate, but if you want to escape the city limits, hire a car and drive into the surrounding hills. Art aficionados should visit the Matisse Museum and the Museum of Modern and Contemporary Art (MAMAC), whilst history buffs should head for the Roman ruins of Cemenelum and the Terra Armata museum.

The week long Jazz Festival attracts in excess of 45,000 visitors so you are best to book your hotel early. There is plenty of affordable accommodation, but expect to pay somewhere in the region of €70-€100 a night for a three-star hotel. Alternatively you can get a guesthouse for around €45. If the location of the Jazz festival influences your choice of hotel the principal venues are gardens of Albert 1st and the gardens next to Place Masséna.

The line-up for this year´s festival will include (in alphabetical order):

Nathan is a prolific writer who specializes in music and travel/holiday homes related articles. Having read this article why not book an apartment in Nice and go to see the festival for yourself?

View The Nice Jazz Festival: Fun in the Sun France in a larger map

« Must do guide of Cardiff – Wales | United Kingdom
A Few Things to do in Majorca | Balearic islands, Spain »