Cassis is a French fishing port 12 miles east of Marseille, on the Cote d’Azur. Unlike its neighbours, Cannes, Nice and St Tropez, Cassis has retained its traditional charm, wowing visitors with its natural beauty and peaceful atmosphere. Although it is a favourite holiday destination for celebrities and wealthy Europeans, the village is without the glitz and glamour usually associated with the French Riviera. The area is famous for its fjord-like bays, called ‘calanques’, imposing white limestone cliffs and vineyards that creep to the shore. One of the highest maritime bluffs in Europe, Cap Canaille, is situated between Cassis and La Ciotat. The 1,203 foot bluff has been a landmark to sailors for millennia. 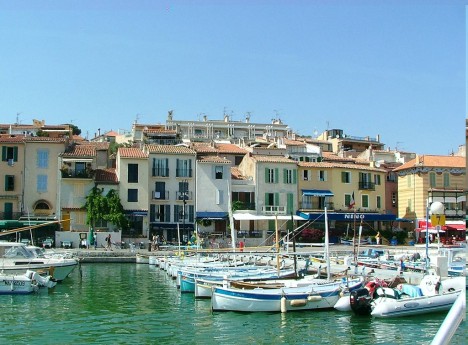 Photo licensed under the Creative Commons, created by Phyllis Buchanan

The village of Cassis

The picturesque village of Cassis is set on a working fishing port, where fishermen can be seen pulling baby squid, crabs, clams, prawns and sea urchins from the ocean, for sale at local restaurants. The port is lined with fishermen’s houses in pink, yellow and eggshell-blue, the pastels favoured in Provence. The town is dotted with restaurants serving fresh seafood at a range of prices. The Michelin-starred La Villa Madie restaurant is set on the cliffs of Cassis, combining a splendid view with exceptional food.

Cassis boasts unspoiled beaches, far quieter than those in neighbouring towns and cities, that don’t close, making a midnight dip possible for those who want to indulge. There are no noisy private beaches either – the only music one can hear is provided by the scores of cicadas. The region is so well-known for its cicadas that many souvenir shops sell cicada-related memorabilia. The water in the ‘calanques’ stay shallow quite far out, creating great conditions for snorkelling. The beaches are rocky with sparse trees reaching down to the shore, but are bordered by vineyards, fig and olive trees. 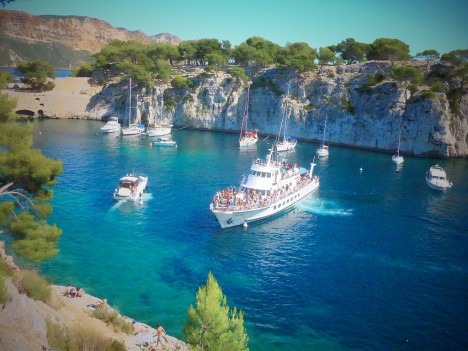 Photo licensed under the Creative Commons, created by Evan Bench

The region’s famous white wine is said to be the perfect accompaniment to the local seafood. In 1936, Cassis wine, together with Chateauneuf du Pape and Sauternes, obtained the first term of controlled origin in France. Although rose and red wines are produced in the region, the white remains the most popular and most famous, and vineyards cover 470 acres. Because the area is sunny, with no violent weather changes, the area is perfect for growing grapes and has been used for this since 600 BC. Cassis white wine is a golden straw colour, with a nutty flavour.

Activities in and around Cassis

Aside from gorgeous beaches, wonderful food and magnificent wine, Cassis offers visitors a range of activities. There are many sightseeing cruises along the ‘calanques’ or, for those who want to see them more closely, rock-climbing up the sandstone cliffs. Small boats can be hired in the harbour and used as taxis to out-of-the-way nooks along the coast. The area is popular with cyclists and regularly hosts cycling competitions. Of course, visitors love hiking along the tops of the cliffs and, for the few days when the weather isn’t quite right for spending time outdoors, there are a number of vineyard tours with wine-tasting included.

This article was written by Martin Boulton from medwelcome