I usually have to wait a full three years for the Three Choirs Festival to be hosted by my home town of Hereford. This year, however, I and all the other lucky music lovers have to wait one month less. 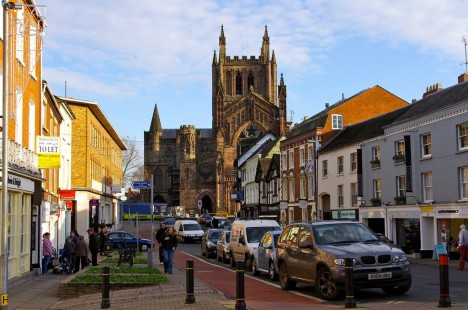 Photo licensed under the Creative Commons, created by David Merrett

To avoid a clash with the 2012 Olympics in London (never heard of it, personally), the festival has been brought forward from its usual August schedule. It will now take place, in and around the glorious Hereford Cathedral, from 21-28 July.

For those of you who have never heard of the Three Choirs Festival, you’re in or a treat. Let me enlighten you and perhaps you can comment in reply, introducing me to the various ins and outs of these so-called Olympics (whatever they might be).

The Tree Choirs Festival has been running for nearly 400 years. It began as a two-day gathering to celebrate ecclesiastical music and gather the bordering cathedral counties of Hereford, Worcester and Gloucester.

Since its inception, the festival has developed and expanded, with each of the three cities hosting according annual rotation. The three choirs of the respective cathedrals remain central to the programme; although other core ensembles and distinguished guests have been added, in recent years.

The festival has a long association with distinguished British composers, such as Ralph Vaughan Williams and Edward Elgar. Purcell and Handel were frequently performed across the 18th century, while Mendelssohn and Haydn became firm festival favourites from in the 19th century.

Beethoven, Mozart and Rossini became extremely popular in the 1800s, but the greatest impact was not made by a composer, but by engineers. With the invention of the railway, the festival gained large crowds and revenues.

This new found popularity did not sit easily with The Church and the festival was scaled back, but it wasn’t to last. The festival was reinstated in all its glory as J.S. Bach was played for the first time.

In the 20th century the festival concentrated on British musicians and began a tradition of premiering and commission new work, including that of Finzi, Howell and Parry.

Now, the three cathedral choirs are joined by the Festival Chorus, who perform the majority of the large scale repertoire. Guests are also regularly invited and this year sees the beginning of the Philharmonia Orchestra’s three year-long residency, as well as the first visit of composer Diego Mathuez from Venezuala and a world premier by Dobrina Tabakova.

If you’d like to learn more of the history, then there is an excellent timeline of the Three Choir’s most important events on their website.

Written by Simon for Hotel Shop, offering cheap breaks across the UK and beyond.