The world is full of new and interesting foods. While most would think the developing countries in Africa or Asia may have the most unbelievably confusing meals, you can find foods that are at the top of the charts in terms of weirdness in other places; one of those places is London. 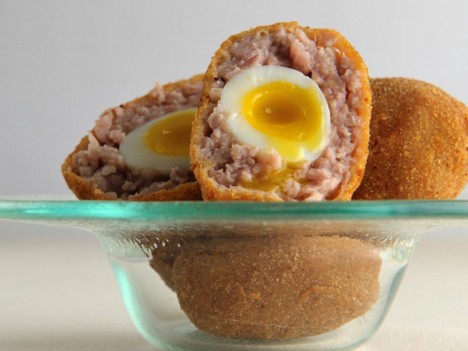 Yes, London is home to some of the strangest foods and delicacies in the world. While it’s not surprising based on the city’s diverse cultures and knack for serving up odd meals, you can’t help but wonder how some of these foods actually became popular.

Here are some of London’s weirdest foods:

Do I really need to tell you what’s in this delicacy? If you couldn’t figure it out by now, all that’s in a chocolate covered scorpion is, you guessed it, chocolate and a scorpion.

It sounds downright disgusting, but people have reported that the texture and taste is similar to a Kit Kat bar. How lovely! If you’re willing to give this a shot, you can order them through various online sources, or you can just go straight to a shop in London. Be careful, these are a bit on the expensive side.

Invented in 1738 by Fortnum & Mason, a department store located in central London, the scotch egg quickly caught on. While Americans might think it’s strange that a department store would sell food items, it’s perfectly normal in the UK.

A scotch egg consists of a hard-boiled egg wrapped in sausage, rolled in breadcrumbs and then finally deep-fried to perfection. It sounds like something a group of drunk chavs would think of, but it’s actually a perfect combination of flavor and texture, and the price isn’t too bad, either.

Mate! Pass me a pint and kidney pie! Well, something like that. Whatever London natives say is what they’ll say!

Anyway, yes, this is typically served in a pub setting. In a kidney pie you’ll find diced or mashed kidney (typically from lamb or pig), onion and gravy. The gravy is a mixture of broth, Worcestershire sauce, black pepper and flour to give it some form. All of these ingredients get stuffed into a puffed pastry.

As the name implies, you can find a slab of kangaroo meat primed and ready to be eaten. Much like how conventional steak eaters would order based on temperature, you’d do the same here. While the meat is a bit tougher when compared to its more common beef brother, it’s still a delectable and juicy experience.

There are a couple of restaurants in the heart of London that serve this specialty, so don’t miss out!

Yeah, that’s actually the name of the dish, and after you see what it is, you’ll wholeheartedly agree with the name.

The ‘Strange Thing’ is a pastry filled with cheese, courgette (zucchini) and sweet corn. I’m not sure who came up with this idea, but sheesh, what an imagination, huh?

Surprisingly, it actually has been noted as having a fairly rich and decadent flavor, with the cheese balancing out the sweetness of the courgette and sweet corn.

There you have it: some of the weirdest foods that London has to offer. If you’re feeling brave, give ‘em a shot!

About the author: Joe Petchonka writes web content, press releases and blogs for a number of different organizations, including CT used cars dealers.