A Guide to Bass Rock in Scotland, United Kingdom

Bass Rock is a tiny island measuring in at just seven square acres in size. Despite the small total area of the island, Bass Rock is a culturally and historically significant landmark. It is located in an area off the coast of Scotland known as the Firth of Forth. Most visitors who see Bass Rock do so on tours from North Berwick, the nearest major town on the Scottish mainland. If you are planning an upcoming trip to Scotland, and in particular to the region known as the Lothian’s, then make room in your travel itinerary to visit this fascinating natural island off the coast. 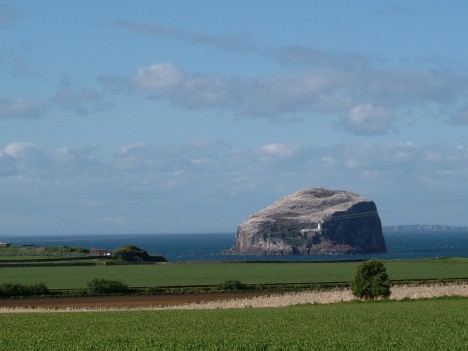 A great view of Bass rock / Photo licensed under the Creative Commons, created by Karen Roe

The rock was once the home of a group of Christian hermits who lived a simple and isolated life on the island. The most famous of these early inhabitants was St. Baldred, said to have made the Bass Rock his home as early as the sixth century. A medieval castle was built on the island that in later years was used as a prison. Today, however, all that can be seen of the structure is ruins. A lighthouse was constructed on Bass Rock in 1902 and is now the only building on the island. Bass Rock is home to a large gannet colony, making it a prime birdwatching destination. It has also been mentioned multiple times in literature by the likes of Robert Louis Stevenson, Bruce Marshall and James Robertson.

Although there is plenty of historical and cultural significance to Bass Rock, most people want to tour the island thanks to the huge gannet colony. From far away the island might look white, but the colour is actually due to the dense population of white birds on Bass Rock. An hour long boat trip from the Scottish mainland will bring you right up to the island itself and costs twenty-two pounds per person. If you want a more elaborate tour, a five hour boat trip actually takes you onto the island and a local guide will let you feed the gannets and even tour the lighthouse. This longer trip will be ninety-eight pounds per person and needs to be booked at least a few days in advance. 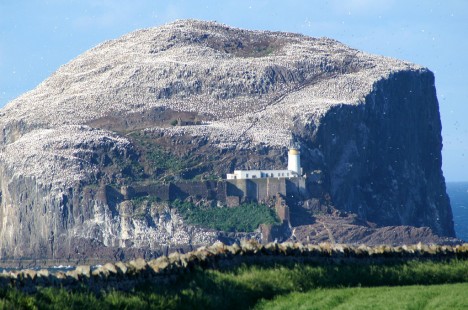 A close-up of the Lighthouse on Bass Rock / Photo licensed under the Creative Commons, created by Martin Pettitt

The Scottish mainland is just one mile from Bass Rock and boasts plenty of interesting local attractions. Most people choose to explore the town of North Berwick while in the area. Head to the Scottish Seabird Centre in North Berwick in order to learn more about the birds that live in the vicinity and better understand the natural wildlife along the coast. There is a beautiful viewing platform over the sea as well as a popular cafe that offers delicious local Scottish meals. Just south of North Berwick along the coastline is the Tantallon Castle, a fourteenth century fortress that is available for touring most of the year. Admission is £4.70 for an adult to tour the castle and there are discounts for children and seniors.

Accommodations in the Area

Unfortunately there is no accommodation directly on Bass Rock. As a result you will have to stay on the Scottish mainland at night and set off on day boat tours of the island. Since there are not a large number of hotels in the area, you might want to choose one of the many Scottish apartments instead and enjoy a self catering holiday. You can find local apartments for rent in North Berwick or other nearby coastal towns such as Dunbar or Aberlady. By shopping for groceries and using the equipped kitchens in the apartments, you can actually save yourself a significant amount of money on your holiday.

View A Guide to Bass Rock in Scotland, United Kingdom in a larger map