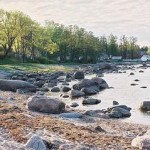 In northern Estonia at an area less than 700 km2 lies the largest and oldest national park in the country – Lahemaa National Park. The park was established in 1971, as the first national park in the former USSR, in order to preserve many local natural places, but also a number of historical, archaeological and […]