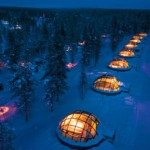 From the height it looks a bit like UFO landing site. Shining glass balls situated in the snow and geometrically perfectly arranged in the middle of the forest… But in fact it is a glass igloo village Kakslauttanen, built by Finns in Lapland at Saariselkä ski resort, about 250 km above the Arctic Circle. Photo […] 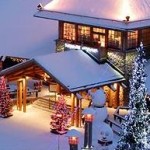 Santa Claus Village is an amusement park in Finland. It is located in the northern part of the country, in Lapland, near the town of Rovaniemi on the Arctic Circle. Santa Claus Village was formed with only few wooden-cottages in 1950. Today it is a complex, which consists of several cafes, shops and refreshment facilities. […]