Most beautiful castles in Germany

Lichtenstein Castle – another fairytale castle in Germany with awe-inspiring views

It was back in 1840 when the Lichtenstein Castle was built in Germany, along the edges of the Swabian Alps. Sitting at an elevation of 817 meters above the sea, the Lichtenstein Castle overlooks the surrounding countryside just outside of Baden-Württemberg. The awe-inspiring views afforded to one who makes their way to the gates of […]

While there are countless castles in Germany that are just waiting to be explored, none of them can compare to that of the Löwenburg Castle. This beautiful castle is located within the prestigious Wilhelmshöhe Berg Park. The Löwenburg Castle was built back in the 18th century by Landgrave Wilhelm IX. As such, it is actually […]

You will find the Neuschwanstein Castle in the southernmost portion of Bavaria. The castle is considered to be one of the most photographed destinations in all of Germany. The castle and the surrounding grounds offers some of the most picturesque views imaginable. It was back in 1869 when Ludwig II commissioned the construction of Neuschwanstein […]

Just outside of Stuttgart, you will find the Hohenzollern Castle – one of the most picturesque castles not only in Germany but also throughout the whole Europe. Situated on top of an 855 meter tall mountain, the castle was first built back during the 11th century, then was rebuilt in 1423. The Hohenzollern family was […]

It was back in the 12th century when the Eltz Castle was first built in the western part of Germany. For 33 generations, the castle has remained in hands of the same family. Today, members of the family still live in one of the Castle’s wings. It is a beautiful example of fine German architecture […] 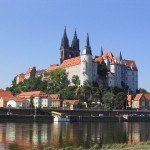 Hohenschwangau Castle or Neuschwanstein in Germany

Hohenschwangau Castle (Schloss Hohenschwanstein) is a 19th century palace in southern Germany in wonderful place in mountains. It was the childhood residence of King Ludwig II of Bavaria and was built by his father, King Maximilian II of Bavaria. It is located very close to the border with Austria in the German village of Schwangau […]