You will find the Old Harry Rocks along the area that has been dubbed, the Jurassic Coast. Situated just off from the coasts of Purbeck Isle, in an area of the island that has been known for centuries as Handfast Point, the two limestone rock formations can be seen sitting in the surf.

The area where the Old Harry Rocks sits is known as the Jurassic coast. Because of tectonics, the land has folded over and over itself time and time again. As a result, rocks that date back to not just the Jurassic period, but also the Triassic and Cretaceous period can be seen clearly. Amongst these rocks are the fossils of countless dinosaurs from long ago; just waiting to be uncovered. 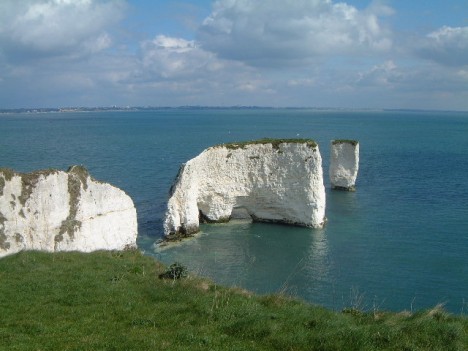 The area where the Old Harry Rocks can be found is filled with chalk and this particular kind of rock is very resistant to the acidic attacks by saltwater. There was a day when a number of chalk columns stood in the area, but because of erosion by the waves, one by one they have tumbled to the sea. The last rock to fall was back in 1896, it was considered to be the wife of Old Harry. Today, all that is left of her is a stump.

However, to the east, just across the water you will see the very popular Needles that are situated along the coastline of the Isle of Wight. While the distance is quite far if the day is clear enough then you should have no problems seeing the Needles. It is said, that the islands used to be connected by the chalk but over the millennia this bridge has long since eroded away. 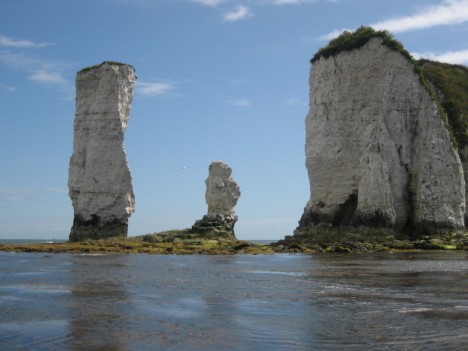 Before long, it is expected that the Old Harry Rocks too will succumb to erosion. There are many people working together to find a way to protect the rocks and preserve them from the tremendous force of the waves and time.

As local legend has it, the name of the Old Harry Rocks comes from an infamous pirate who hid out in the area. Harry Paye, who was a pirate from Poole, used the area as his hideout and was said to have buried his treasures along the rocky shores of the island. While no treasure has ever been found, the name stuck as a symbol to the history that has made the island what it is today.