The Needles – very impressive columns of chalk on the Isle of Wight, United Kingdom

Located along the western shores of the Isle of Wight, you will find the very impressive columns of chalk that can be seen rising up out of the sea. Known as The Needles, the three needle shaped pillars are a popular attraction in the area.

The area where the Needles can be found is known as the Jurassic Coast. It is here that the land has been folded as a result of tectonics over the course of millions of years. As a result, the almost vertical strands of rocks can be seen throughout the region. Chalk is one of the more resilient rocks and as a result has continued to stand long after the clays and sandstones have washed away. 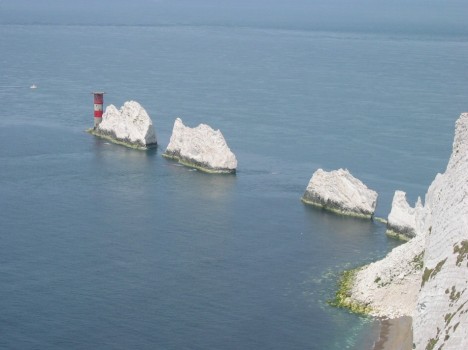 The Needles, Isle of Wight, UK by Peter Pearson

It was known that back in the beginning of the eighteenth century, there were four needles in the formation. However, in 1764 a storm ravished the area and knocked over one of the rocks. The name the Needles dates back hundreds of years. Today though, the rocks have lost their needle-like appearance as a result of erosion by the waves.

Another popular attraction in the area is the Needles Lighthouse which was built back in 1859. It has been operational ever since. However, in order to reduce costs and manpower, the lighthouse was automated back in 1994.

There is also an amusement park that can be found on a nearby cliff that over looks the geological land formation. Known as the Needles Pleasure Park, it has grown to become a very popular destination in the area. The park is most well known for the chairlift that takes people to Alum Bay and back.

The headlands that overlook the Needles are home to several gun batteries as well as an experimental testing facility for rockets. While the batteries were in use during the 1950s and 60s, they have long since been decommissioned. The rocket test facility is located mostly underground and was operated by as many as 240 people during the 1960s. Part of the underground facilities have been completely restored and are currently open to the public.

Most of the park and surrounding countryside can be travelled using bicycle or on foot. However, when there is a high wind warning in the area, the site where the batteries are located is closed for safety reasons.