The cove has attracted countless visitors not only because of its beauty, but also because of its mysteries. The rocks that form the walls of the cove consist of bands of rocks which over the years have formed parallel to the coastline. 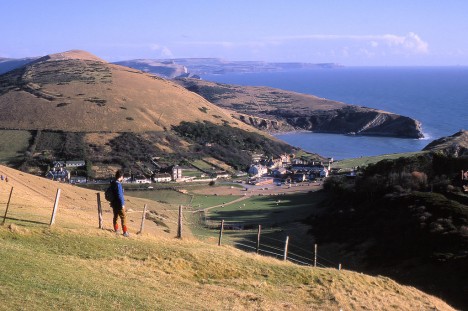 The cove entrance is nothing more than a small gap that has been eroded away between some bands of limestone. Since the limestone is the most resilient of the shoreline rocks, it is found most abundantly in the area. The cove itself was once filled with sands and clays which over the millennia have been eroded away by the waves and through water run-off.

Over the years, as the waves started making their way into the cove, they started to reshape it. The uniqueness of the Lulworth Cove’s shape is as a result of what is known as wave diffraction. Needless to say, the cove is a very unique and picturesque geological landmark in the UK.

It is believed that only a few thousand years ago, the Lulworth Cove looked much different than it does today. Only about a kilometre away you will find a site that is known as Stair Hole. Many people believe that the cove started off very similar to the hole before reaching the shape it is known for today.

Anyone who makes their way to the Jurassic Coast has to stop at West Lulworth first. From here, most make their way to the Lulworth Cove before stopping off to see the many other popular sites along the coastlines. Here, where the land has simply folded over on itself time and time again, you will find some of the most amazing geological formations as well as the potential to find some fossils that date back to the day when dinosaurs called the area home.

The area is also importance to the nation as the sand beneath the area where the Lulworth Cove sits is one of the richest oil deposits in the United Kingdom. With the coastline being designated a World Heritage Site, special care must be taken to extract the oil from the seabed without affecting the coastline and the fossils buried beneath.