The 886 meter tall Pen y Fan can be found within the borders of the Brecon Beacons National Park. Running from east to west, the summit is parts of a small ridge that starts at the Talybont Reservoir and ends at the peak of Corn Du.

The mountain is composed of Old Red Sandstone which dates back to the Devonian Era. The summit peaks are also composed of sandstone, but are much more resilient to erosion than the Old Red variety. As the glaciers in the area receded following the last ice age, the twin peaks of Pen y Fan and Corn Du were formed. 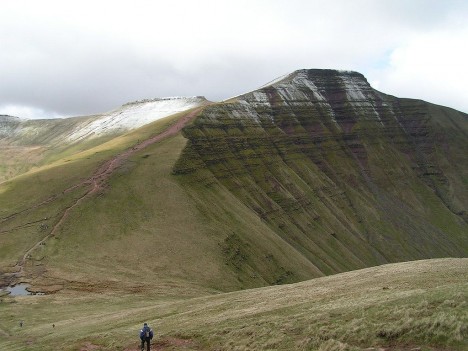 On the side of the mountain slopes along the path that leads from the Storey Arms to the summit of Pen y Fan, you will find an obelisk which was constructed and dedicated in memory of a five year old child who had died on the spot back in August of 1900. The child was the son of a coal miner from Rhondda who was on his way to visit his grandparents who lived near the Cwm Llwch Farmhouse. For twenty nine days the locals searched for the missing child before discovering his body where the memorial obelisk stands today.

Those who visit the mountains may also see military recruits along the paths leading to the top of Pen y Fan. Carrying a standard duffle, rifle plus food rations, those who want to join the UK Special Forces must pass the rigorous test that has become known over the years as the Fan Dance.

In similar fashion to the military training endurance test, a series of annual races are conducted along the same route in the middle of January and July each year. Racers start just south of Cwm Llwch and proceeds up to Pen y Fan as well as Corn Du. The current record for the 5.6 kilometer long race is only 30 minutes. On the same day as the summer race, the Brecon Beacons National Park also holds its annual sixteen kilometer Fan y Big Horseshoe Race.

Those who travel to the peak of Pen y Fan will be rewarded with some of the most awe-inspiring views of the region. It is said that when the day is clear, one can see even the Bristol Channel as well as the islands in the channel, Flat Holm and Steep Holm. You can also see the Swansea Bay, Cardigan Bay, and the Carmarthen Bay from the summit. The peak is the highest in South Wales and as such, you can see the far off Black Mountains, Cambrian Mountains as well as most of Mid and South Wales.