One of the most impressive displays of Mother Nature’s power can be seen along the lengths of the River Severn. The Severn Bore is considered to be the second highest tidal bore in the world as it often rises as much as 15.4 meters above the standard levels of the river.

River bores or tidal waves are a rarity. There are only sixty known bores that occur around the world to date. Owing the formation of the Severn Bore to the shape of the river’s estuary, the tidal waves are able to form and flow down the river. The bore maintains an average roughly 14 knots as it makes its way down the river. People who visit the river banks during this even can hear the roar of the water as much as twenty two kilometers away from the head. 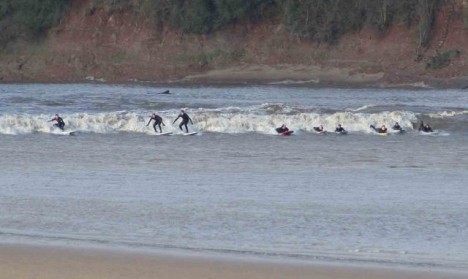 People wanting to view the power of the Severn Bore, should visit the area during the spring time. Since the bore is caused by the tides, the Environment Agency is able to publish regular occurrences of the bore and its expected height.

One of the best viewing locations of the Severn Bore is on the eastern banks of the river in Stonebench. Some say that the best place to see the bore is from the Severn Bore Inn which is located in Minsterworth. Here there is a pub, food a car park as well as floodlights for nighttime viewing of the river bores. Some say that the best time to witness the bores is in the dark of night when you have to use a floodlight to see the water.

Countless people stop at the Over Bridge which crosses the River Severn. From this viewpoint, you can watch the tidal waves as it surges directly under your feet. You can feel the force of the water rushing under the bridge as the entire ground shakes. The feeling of having witnessed the Severn Bore “Over the River” is an amazing one.