In the Southern Alps, located in the northern part of Italy is where you will find the town of Cortina d’Ampezzo. The town is a well-known skiing spot which has many fine accommodations, restaurants and shops throughout the area. Cortina d’Ampezzo was the original planned location for the Olympics back in 1944, but as a result of the war, the location was changed. However, after the war was over, the town was able to host the Winter Olympics in 1956. 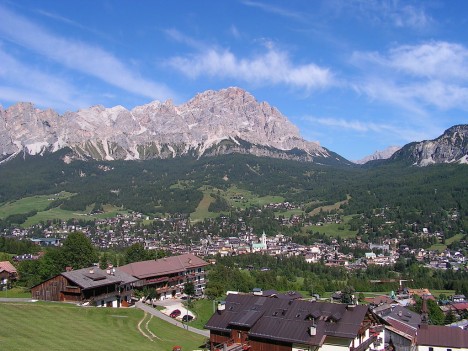 The 1963 film The Pink Panther was filmed in the area as was the 1981 James Bond sequel, For Your Eyes Only. Several scenes from the film cliffhanger were also filmed in the slopes surrounding Cortina d’Ampezzo.

The town itself is situated atop the Valle del Boite with the valleys of Puster, Val d’ Ansiei and Agordo on all sides. To the west of Cortina d’Ampezzo is where you will find the famous Tofane Mountains. The Pomagagnon Mountains are to the north, Sorapis and Faloria Mountains to the East and the Becco di Mezzodì mountains to the south.

Many of the world’s finest winter sporting events have been held in the slopes surrounding Cortina d’Ampezzo over the years. The Nordic as well as the Alpine World Skiing Championships have been held in the city throughout the 1940s. While the city has made bids for both the 1988 and 1992 winter Olympics, they unfortunately lost the bids to Calgary and Albertville.

« Paris – the most visited city in the world is located in France
Murano, Burano and Torcello islands – Famous Lagoon in Italy »