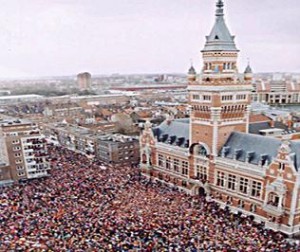 Dunkerque (or Dunkirk in English) is a city in northern France, near the border with Belgium. Administratively it is situated in Nord-Pas-de-Calais and the Nord département. Today the city has approximately 70.000 inhabitants. City of Dunkirk is situated on the banks of the North Sea and is significantly associated mainly with shipping. We can find here even the third largest French port after those of Marseille and Le Havre. A large part around Dunkirk is formed by sand dunes. The city got its name thanks to those dunes, which derives from an old Flemish and represents the church in the dunes. Dunkerque is also known as the venue of the traditional carnival, when the whole town dressed in masks and celebrate. But the town is linked to the turbulent history of the Second World War.

One of the most beautiful buildings in Dunkerque is certainly the local town hall dating from the early 20th century. Amongst others, we can notice the facade of the hero image of Jean Bart and his crew. Hall is registered as a UNESCO World Heritage Site.

Equally beautiful is the Gothic church of Saint-Eloi. During the Second World War was almost completely destroyed, retained only the front wall. Reconstruction took place at the beginning of this millennium, as a reminder of the horrors of war were left craters in the facade of bullet holes. Church of Saint-Eloi was originally connected with a bell tower, in the late 19th century, these buildings were separated. Now, there is a busy street between them. Even the bell tower is part of UNESCO.

Near the port of Dunkerque is Leughenaer tower, which was originally part of the fortifications. Interesting is also the chapel of Notre Dame des Dunes.

In the port we can visit the Maritime Museum, just opposite is a beautiful ship Duchesse Anne, which is also a popular destination for visitors.