Hochosterwitz castle in Austria – one of the biggest castles in Europe 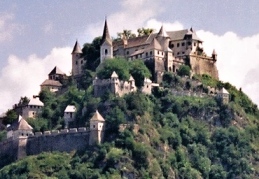 Hochosterwitz castle is one of the largest castles in Europe. It is located in Austria, about 8 km east of the town of Sankt Veit an der Glan, and 22 km northeast of the city of Klagenfurt. Hochosterwitz castle stands on a secluded hill on the edge of large forests. There is a very nice view of the landscape from the castle and you can see it even from about 30 km distance.

Hochosterwitz castle is very old. It was first mentioned as early as the 860th. The castle was heavily damaged by frequent incursions of Turkish troops at the turn of the 16th and 17th century. In 1541 it was a site of of Emperor Ferdinand I. Later in 1571, it was bought by Baron George Khevenhüller. Since then the owners of the castle is still the Khevenhüller family. Under their rule in 1570-1586 the castle was extended to large fortification system, which was at that time quite unique in its scope.

The access road is over 600 meters long and you have to pass through 14 gates. According to the legend, Hochosterwitz castle has never been conquered. Inside the castle there is a chapel with wall paintings or the tank of water 13 meters deep. In the interior there is a museum exhibition and a restaurant.

Hochosterwitz castle is privately owned but it is open to the public in the period from Easter to October.

« Windsor Castle in England – the longest-occupied castle in Europe
Europa-Park in Rust, Germany – travel through the best European countries within 2 days »