Amiens – beautiful city in France and the birthplace of Jules Verne

In northern France, in the Somme River valley lies one beautiful town of Amiens. It is located in the French region of Picardie and has about 135,000 inhabitants. Its history dates far back. It was inhabited by the Gallic tribe Albiano already before the arrival of the Romans. The Romans then built a city here called Samarobriva. In late 54 and 53 BC, even Claire Caesar spent here some time, who was trying to get Gaul. In these times, Amiens was considered one of the most important Roman cities in Gaul. In 287 the bishopric was established there. The city is also linked with the legend of Saint Martin, who allegedly shared half of his clothing with the beggar. In medieval times, Amiens, was known worldwide for its textiles. On 25 March 1802 was in City Hall signed the peace agreement between England and France. 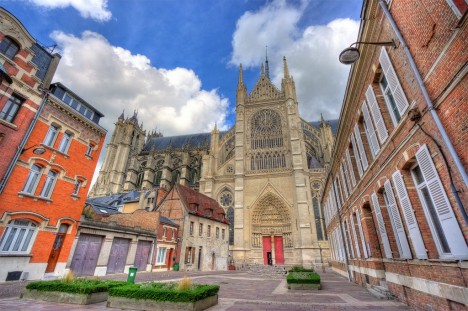 The destruction and bombing of the city during the First and Second World War, miraculously didn’t destroyed the great Cathédrale de Notre-Dame, which is the main reason for visiting Amiens. It is a wonderful representative of the French Gothic style and it is also the highest cathedral in all of France. It stands on the place of the burnt Romanesque basilica. It was built between 1220 – 1236 and at that time it was the largest in France. The building is 145 meters long, 112 meters high. Arches inside the vault measured 42,3 meters. The cathedral was not built just to their astonishing height, but also as a place to be imposed on the head of John the Baptist brought from a failed crusade. The construction involved three architects, the most famous of them was Robert de Luzarches.

The city tour can proceed in the district St. Leu, which is the oldest and most attractive part of Amiens. It extends north from the cathedral and you can get into it through one of the bridges over the river Somme. You will find the narrow cobbled streets with flowers, restaurants, cafes, as well as antique markets and small art studios. The local squares are lined with canals, and therefore this area is often called Little Venice – La Petite Venice. If you will be tired, you can get into a boat and get a ride on the canal between the flowering gardens. The streets around the cathedral have beautifully renovated building, such as the medieval bell tower or a house, which houses the Museo de Picardie. This museum has a wide focus, you will find here something from each side, plus a few hidden archaeological pieces. Here you can see the works from the Roman period up to the 20th century, but excels mainly in the collection of French paintings and sculptures. Statues of glowing white marble from the 19th century are very charming, as well as works by Picasso and Balthus located on the second floor.

Another interesting museum is located in the building of the Hotel de Berny from 17th century.

One of the famous people that were born in Amiens was the writer Jules Verne (1828 – 1905), whose house Maison á la Tour you can visit here. Verne wrote a large part of his fantasy novels right here.

Other sights include the Perret tower standing next to the station from August Peretti, or a number of churches, such as Ste Jeanne d’Arc, St Acheul, Sainte Anne or Saint Firmin. In 1970, the University of Jules Verne was founded here in Amiens.