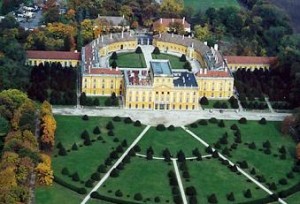 Esterházy Palace is one of the largest and most beautiful castles of Hungary. The castle is located in the village Fertőd at the western part of the country, close to the Austrian borders. In the mid 18th century, Miklós Esterházy rebuilt a hunting lodge to the Baroque – Rococo palace. The castle is called also the Hungarian Versailles.

The complex consists of the palace with 126 rooms, opera house, Diana’s Temple, the Temple of Venus, the Hermitage, the Chinese pavilion, dance hall, puppet theatre and a large French garden. The castle was a home of the Austrian composer Joseph Haydn for almost thirty years. Even Empress Maria Theresa lived here in 1773.

After the death of Count Esterházy, the family left and the castle remained empty for nearly a whole century. During the Second World War, the chateau served as a hospital and was damaged. In the past few years the castle has been partially renovated and rebuilt into a hotel. Today there are 26 rooms ​​available.

There is a museum and music hall. Every year it hosts International Music Festival and Weeks of music.