Leaning tower of Pisa – a famous landmark in Italy 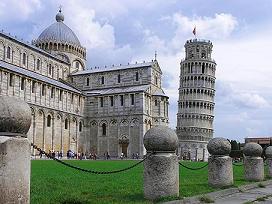 Just few cities in Europe and indeed in the whole world, gained such fame thanks to one building, as the Tuscan city of Pisa. By this building is obviously not meant anything other than the famous Leaning Tower. For a long period of its existence it has become not only a symbol of the city, but also a major tourist attraction throughout Italy. It is similar to the Pyramids of Egypt which almost everyone knows, at least from the television or from photographs. However knowledge of this tower usually ends with its appearance, so I suppose it will not be useless to remind some basic facts.

Leaning Tower of Pisa was built as a freestanding bell tower of the Pisa Cathedral. However in the beginning, the tower stood uprightly like the majority of bell towers. But because of carelessly made ​​bases and soft soil it started to lean. Leaning Tower of Pisa is one of the few cases where thanks to poor work it became popular throughout the world.

The building is approximately 55.9 meters high on the lower side and 56.7 meters on that higher one. To its top you can get by 294 stairs. Construction of the tower began in 1173 and lasted almost 200 years since it was interrupted several times due to the wars with its neighbours (Genoa, Lucca and Florence). Its top with the bells was finished in 1372. However at that time the tower was already inclined, actually since the completion of the first three floors in 1178.

Because the tilt of the tower was constantly increasing and threatening its collapse, the tower was closed to the public in 1990 and rescue works started. In 2001 the tower was finally reopened with the statement that it should be stable at least for the following 300 years.

Although the Leaning tower is the most famous attraction in Pisa, it is not the only one. It stands in a place called Campo dei Miracoli or “Field of Miracles”. We can find here other wonderful architectural gems, such as Duomo, the Baptistery, or monumental cemetery Campo Santo. All the buildings are really beautiful, but in fact, they still attract far less attention than the famous tower.