Ayia Napa Resort with its most beautiful beaches in Cyprus 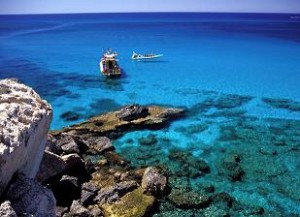 Ayia Napa is a very famous and popular resort, which can be found in the south-eastern tip of the island of Cyprus. Originally a poor fishing village Ayia Napa changed it face like by a magic into a very visited site, which annually welcomes thousands of tourists from all around the world.

Sandy beaches on the southern coast of Cyprus are very popular among tourists already for years. There are lots of young people coming here every summer. Cyprus’ beaches are traditionally evaluated very positively. The coast slowly descends into the warm turquoise water. The crystal clear sea is suitable for the lovers of water sports – here you can try paragliding or riding on water skis, or diving.

Until the late 18th century, the only inhabitants on the island were monks from the local monastery. The monastery was built specifically as a home for sacred icon, which according to legend, should appear to hunters during hunting. Just after almost two centuries, about twenty civilians moved to the area and founded the city, in the middle of which you can find a monastery.

Nature around Ayia Napa is beautiful, there are also many cultural and historical monuments and archaeological sites and beautiful churches.

How to get here
During the summer season you can take a ferry from the Greek island of Rhodes or the city of Piraeus and Turkish Tasuku. It can be reached by air, Ayia Napa is located about 50 kilometers from the airport in Larnaca.