The present appearance of Bouzov castle dates back to its massive Neo-gothic reconstruction during the late 19th and early 20th century. But the first written mention of the castle comes from 1317, when it was owned by aristocratic Bůz of Bludovec family. This medieval castle often changed owners and its appearance. Margrave Jošt built the walls and bailey wall and subsequent owners – the Lords of Kunštát, just improved this defence system. 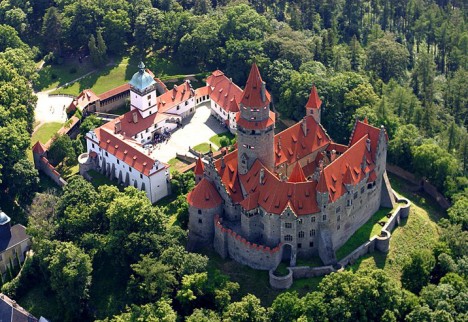 Bouzov castle is also possible birthplace of the Czech King Jiří z Poděbrad (George of Poděbrady), whose family – the lords of Kunštát – owned this castle from 1396 until the end of the 15th century. At the end of the 16th century almost the whole castle was destroyed by fire. The owners of the castle had not fully reconstructed it, but they tried to sell it. But there was nobody who would like to buy such a “ruin” so they forced Grand Master of the Order of the Teutonic Knights to buy it. In the 19th century the castle was rebuilt by a young Grand Master archduke Eugen of Austria in the style of German Neo-gothic. For the reconstruction was responsible Viennese architect Georg Hauberisser who designed the castle as a symbol of medieval traditions and the Teutonic Knights.

He built a new two-storey palace, demolished and restored the old high cylindrical tower. A magnificent furniture, including chairs, beds, tables and even a ceiling, was moved here from various castles. There were built the moat, walls with battlements, drawbridges and great medieval gates. At the same time was also equipped with very modern features, as it had functional bathroom, practical kitchen and phone. However until today it is not electrified.

Bouzov castle is now considered one of the most popular and most visited monuments in the Czech Republic. The castle was a place of several fairy tales, including Arabela, Fantaghirò, and Before the Fall, so if you want to get to the fairy tale for a while, do not wait and come!

The castle is opened from April to October during weekends and holidays only but daily from May to September and the basic admission is around €8. For further information visit official site of the castle (in Czech only).