Arc de Triomphe is after the Eiffel Tower one of the major landmarks and symbols of Paris. It dominates the western end of the famous Parisian Avenue des Champs-Elysées and is a symbol of French national pride and also the second largest triumphal arch in the world. 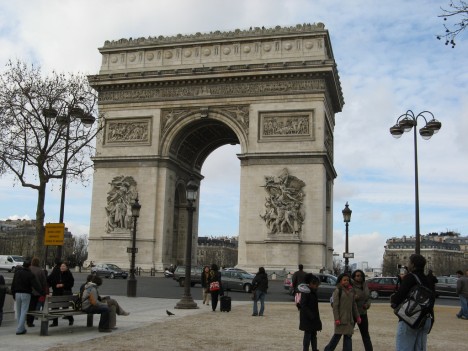 Photo licensed under the Creative Commons, created by Olivier Bruchez

This 50 meters high and 45 meters wide arch was built by Napoleon Bonaparte as a sign of his power and victory of the Great Army – Grande Armée in many battles. Its designer was the French architect Jean-François-Thérèse Chalgrin. The construction started in 1806 and lasts the entire 30 years. Last update was completed in the year 1836, during the reign of Louis Philippe d’Orléans.

Triumphal Arch became almost immediately an important place for great national celebrations and funerals. Also, the deceased Emperor Napoleon was in 1840 transferred through the Arc to Les Invalides during the funeral ceremony. In the 19th century, Baron Haussmann decided to transform the image of the city and Arc de Triomphe became the center of Paris. Today, the Arc is a cross of 12 wide boulevards. The site is known as the Charles-de-Gaulle-Etoile and is bordered by the main transport arteries, which actually form the first organized roundabout in the world.

The main facade of the arch is decorated with four massive statues showing a victorious battles of the French Revolution in 1789 and the First French Empire. Along the top edges are shields engraved with the names of battles of the Great Army. Following the model of Roman arch, the Arc de Triomphe is amended with The National Anthem of France also known as the Marseillaise, made by the sculptor Francois Rude. 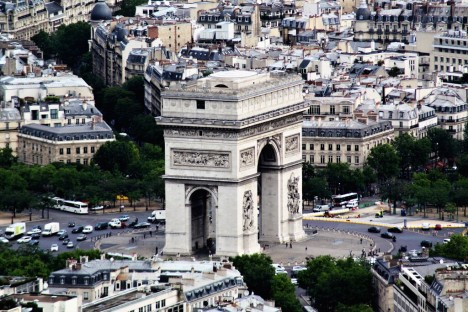 Photo licensed under the Creative Commons, created by Paul

If you want to enjoy a wonderful panoramic view of Paris, take the elevator to the observation terrace on the upper floor. From a height you can see the Louvre, Place de la Concorde – the largest square in Paris and the modern district La Defense. You will appreciate the pleasant atmosphere in the local museum, or watch short films about the Arc.

The arch serves as a national monument to all Frenchmen, fallen in many wars that took place and still take place anywhere in the world.

Under the Arc are also the remains of a major French poet, writer and author of Les Miserables, Victor Hugo. Currently, the Arc de Triomphe serves as the end of Tour de France.

Paris offers lots of holiday apartments for rent, camping sites or luxurious hotel rooms so it should not be a problem to choose the right accommodation for you.