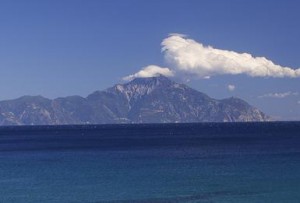 Mount Olympus is the highest mountain in Greece. Its highest peak is Mytikas (2917 m). Olympus was mythological home to twelve most important Greek gods, specifically of the Pantheon. Mount Olympus is World’s Biosphere Reserve and also Olympus National Park. It is a popular tourist destination.

The starting point for visiting the highest peaks is the town of Litochoro, from which you can go by car to the mountain village Priónia and then continue on foot. In the Mount Olympus you can visit Agios Dionysios Monastery (Metochio), which was built in the 15th century and was originally dedicated to the Holy Trinity. It is located 3 km from the town of Litochoro.

In later years it was renamed after its founder monk Dionysus, who came to this area from the Meteora monasteries. During Turkish rule the robbers hid in the monastery who heavily damaged it together with many other sights. Only the perimeter walls with original paintings remained. The monastery is now being renovated – central chapel and the outdoor area were already opened.

It is really amazing to swim in the sea and watching this high mountain.